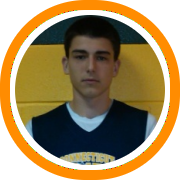 Almost 180 teams from throughout the northeast made the trip to New York’s capitol for the annual Gym Rat Challenge this weekend.  The New England Recruiting Report was on hand on Saturday, doing our best to keep tabs on the local headlines.  Here’s a look at what we saw:

John Papale, Connecticut Hoopstars – With his team trailing a talented Abyssinian Church team by double figures early, Papale raised his game in the second half and took over in overtime, scoring 20 of his game high 32 points after halftime.  Seven of those points came in OT as he converted a four-point-play by coming off a down-screen and draining a three plus the foul.  Then with the game tied and only five seconds left to play in the extra period, Papale came off a ball screen on the right wing and drilled an elbow pull-up while again being fouled, sealing the comeback win for the Hoopstars.

Samir McDaniels, Boston Warriors – McDaniel has been on a tear in recent weeks but Saturday afternoon’s game against the Connecticut Flame was not his finest…until the final second of the game.  McDaniel did his best Ron Artest impression by scoring an offensive put-back as time expired to give the Warriors a one point win.  The play began when Ousmane Drame launched an 18-footer from the right wing.  Seeing that the ball was coming up short, McDaniel crossed the rim to grab the ball out of mid-air and laid it in just as the Laker star did on Thursday night to win game 5 of the Western Conference finals.

Ahead of the Pack

Expressions Elite plowed through the competition in the sixteen-and-under bracket on Saturday with no signs of anyone being able to stand between them and Sunday’s championship.  Khem Birch was an absolute monster on the defensive end, racking up at least 10 blocks in the game we watched and altering several more.  With Birch and Ricardo Ledo joining an already talented roster that includes Akosa Maduegbunam, Tarik Smith, DaQuan Grant, Harrison Taggart, Cornelius Tyson, and others, we aren’t exactly going out on a limb by predicting them to run away with the u16 title.

Massachusetts’ two Magic teams, Bay State and Middlesex, both have outstanding teams this year and as we watched both clubs on Saturday, we couldn’t help but wonder if these two clubs were the best their respective clubs had ever seen.

Pat Connaughton and Patrick Ackerman came up big for the Middlesex Magic in the morning session while Bryan Hurley continued to lead the supporting cast and Jesse Pagliuca chipped in with his shot making.  Connaughton continued to showcase his deceptive length and athleticism in addition to the versatile skill set that allows him to rain threes as well as he does convert jump hooks on the block.  Ackerman does his best work on the defensive end by blocking/altering shots and cleaning the glass, but he has an impressive skill set of his own on the offensive end.

As for the Bay State Magic, head coach and program director Kalon Jenkins confirmed this may be his most talented group ever.  B.C. bound big man Dennis Clifford obviously leads the way but the supporting cast is as deep as they are talented with the likes of Ryan Killcullen, John Henault, Deric McCottrell, Jared Fay, Myles Brilhante, and K.J. Potts, not to mention the expected return of Jose Cruz according to Jenkins.

Shot of the Day

Alex Conaway, Connecticut Hoopstars – The Wilbur Cross forward had a strong all around opening game on Saturday but he brought the crowd to their feet at the close of the first half when he banked in a buzzer beater that he heaved from three-quarters of the quart away at the opposite foul line.

Demitry Coronell, Metro Boston – This was our first good look at Metro since early April and we came away very impressed with East Boston’s swingman.  He’s put on noticeable muscle mass since last year, is shooting a good ball from the perimeter, and playing above the rim in the open floor.

Aboubacar Casse, Rhode Island Breakers – Casse is another guy who has added quite a bit of muscle to his frame, which has helped him develop into a true inside-out threat.  He buried threes, scored with his back to the basket, and even went off the dribble a little bit when we watched.

Brandon Yarbrough, Academic Basketball Club – Made excellent contributions on the defensive end of the floor, locking down on the perimeter while showing the athleticism and toughness to rebound with bigger players inside the paint.

Michael Varrichione, New England Ballas – Liked what we saw for this big fella as he is strong and athletic with a high motor.  He rebounded the ball in high volume off both backboards, blocked a few shots, and changed a variety of others.

Joe Bramanti & Connor Green, Granite State Jayhawks – The Jayhawks 9am win was a game that lacked much rhythm as a frequent whistle and the early tip prevented either team from getting into a great flow.  Bramanti and Green provided some highlights as Bramanti continues to progress with his ability to see the floor and run the team from the point while Green’s consistency continues to stand out, both in terms of his effort and production.

Mike Deffley, Connecticut Knights – With Tylon Smith sent to the bench early in the AM game, Deffley stepped up to put the team on his back, knocking down a couple of three-pointers while also firing accurately from the mid-range area.

Ethan ODay, Drive 4 Stardum – ODay’s progression has continued at a consistent rate and the latest example was Saturday afternoon’s game in which he made a variety of scholarship level plays.  He ran the floor and finished the break with alley-oops, rebounded out of his area, and finished through contact inside the paint.

A scheduling change had us coming up empty when we tried to see Lone Wolf play on Saturday afternoon.  We were also unfortunately able to catch the New England Storm but both local programs had a good buzz amongst the college coaches in attendance.