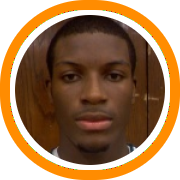 It was an extremely busy day of action on Saturday as 80 teams were in action in the 17u division alone.  There was plenty to be impressed by as certain teams caught our attention collectively while others had certain individuals stand out.

In their opening round of the tournament the Boston Warriors North squad blew out the Long Island Knights on Siena’s center court.  Despite missing Akeem Williams, the Warriors scored 92 points in a game that finished with running time because their advantage had grown so large.  The key to their offensive onslaught was their three-point shooting as the Warriors spread the floor with long distance marksmen and took turns blasting away, finishing the game with 15 makes from behind the arc.  Derek Retos, Mike Accaoui, and Andrew Gosslin all backed up their reputations as big time shot makers.  But they weren’t alone as Alex Kershaw, Jeff Tagger, and Jasper Grassa also got into the act.  With that much offensive firepower on the court at one time, the Warriors are capable of shooting any team out of the gym.

New England Select Toughs It Out

Few teams have shown as much improvement over the first two months of the AAU season as New England Select.  And the biggest difference we between now and then is the level of toughness that this group now exudes.  That was also the key to their hard fought victory over the New Jersey Bulls.  D.J. Fazio and C.J. Moss set the tone in the backcourt as both really get into people defensively and also played strong with the ball against the Bulls’ relentless full court pressure.  Fazio even took two huge charges in transition in the game’s final 90 seconds (the officials may not have given him credit, but both were extremely gutsy and perfectly executed).  No individual has shown more growth in the toughness department than Alex Levine and he proved it today by going hard to the glass, blocking a number of shots, and finishing around the rim against contact.  Offensively, Eric Alleyne and Troy Robinson led the team with 17 and 15 points respectively.

The Jayhawks were one of the few u16 teams to be in action at Siena on Saturday as most were across town at the University at Albany.  The most notable thing about this team continues to be their precision executing their half-court offense.  We even caught a couple of on-looking college coaches jotting down notes on the sets they were watching.

Tylon Smith, CT Knights – The sophomore guard made a statement in his first game of the day as he showed his full offensive repertoire and finished with 22 points.  His three-point shot was his best weapon early but he also got to the rim some as the game went on.

Eric Dubuque, Lone Wolf – He seems to light it up from behind the arc every time we watch, but he’s not just a one trick pony as he also handles effectively within the flow of the offense.

Billy Boyd, Lone Wolf – We liked what we saw from the big man.  He’s a tad undersized for the post and also lacks ideal athleticism, but he compensates by using his body tremendously well, scoring with both hands around the rim, and working his tail off.

Eric Dean, Granite State Jayhawks – The Jayhawks pressed for virtually the entire game and no one was more productive in that system than Dean as he gets a ton of steals and gets his hands on countless more balls.  Offensively, he uses his strong body to get to the rim and showed off a much improved jumper.

Will Bayliss, Granite State Jayhawks – The floor general’s high motor jump started his team for their 9am game on Saturday as he was attacking on both ends of the court.  Defensively, his quickness allows him to pick up the opposing point guard full court while offensively he was making good use of his dribble.

Deshawn Murphy, CT Select – On a team with a couple of stars, Murphy is an unsung hero for Select as he seems to score between 15-20 points every time we watch them play.  Today was no different as he got 19 with a series of strong drives and short jumpers.

Jakarri McCallop, CT Select – Select was virtually deadlocked with Staten Island Rocks at halftime, but when “Champ” showed up at halftime the game opened up quickly as he scored 12 points early in the second half, attacking the rim both in transition and from the high post.

Jordan Smith, SECC All-Stars – SECC won big over the Lake Champlain Lakers and Smith had his fingerprints all over the outcome.  He scored a team high 17 points, and created the quick tempo for his team with his defensive pressure and offensive dribble penetration.

Lenzie Harrison, B.C. Eagles – His numbers didn’t blow you away, but he played as solid of an overall floor game as any point guard we saw.  He had great composure and presence running his team, made the defense pay every time they tried to pressure him, and is an absolute lock down defender in his own right.

Ramon Mejia, Greater Boston Lions – Produced one of the best performances of the morning as he put up a big number against ABC.  He consistently got to the rim and finished plays against contact, and once he got himself into a rhythm even began drilling threes with a hand in his face.

Phil Gaetano, Academic Basketball Club – On loan from CBC this weekend, he certainly paid dividends for ABC as his composure against pressure and passing ability were able to pick apart the full court press of the Greater Boston Lions.

Chris Evans, Academic Basketball Club – Added to his reputation as a lock down defender by being the only one who could slow Mejia.  Also took advantage of his tremendous upper body strength by bringing opposing guards to the low block.

Andrew McCarthy & Dennis Clifford, Bay State Magic – The Magic turned away WODT Athletics with the best team defensive performance of the day as WODT didn’t top the 30 point plateau.  That defensive presence all starts inside as the combination of McCarthy and Clifford totaled over 10 blocks in the game.

Ike Azotam, Metro Boston – Metro found themselves in a tie game with just over 5 seconds to play against the Hudson River Hornets.  They cleared it out for Allen Harris who made a strong drive down the right side but missed a short runner.  That’s when Azotam flew in from the short corner, elevated over the pack, and tipped the ball up and in off the glass just as the buzzer sounded.

Mark Ellis, The Flame – The Stamford High School big man was turning heads with his tremendous athleticism as he threw down more than a couple of thunderous dunks and also made a statement blocking one shot incredibly hard off the backboard.

Jabrille Williams, The Flame – Long 6’5” frame, tremendous length, and ability to run the floor like a deer give this young prospect all the physical tools to be intriguing prospect.  Throw in an effortless three-point stroke and the future should be bright.

Ryan Pina, RI Breakers – The junior swingman was extremely aggressive offensively, sometimes maybe even a little too much, but he played hard and was active on both ends, scored the ball in high volume, and in a variety of ways.

Myles Brilhante, RI Breakers – He’s evolved into a pure point guard and he did a masterful job running his team when we watched Saturday morning.  His passing ability stood out the most as he made the right decisions at the right times, but he also did a nice job of handling the ball against pressure and we already knew he could make open shots.

Ryan Sheehan, MA Premier – He’s forced to play the 5 on this team that lacks a true low post presence, and he did an admirable job of battling inside, but his true game lies on the perimeter where he handled the ball well and knocked down his open looks.

Mike Accaoui, Boston Warriors – Beyond his trademark shooting stroke that we mentioned earlier (he didn’t miss by the way), Accaoui also impressed with the way he was getting after it defensively as well as well as his unselfishness getting his teammates shots.

George Tsougranis, NH Falcons – He got off to a slow start looking to prove his prowess from the perimeter, but once he got back to his bread and butter of controlling the paint he began to both score and rebound the ball in high volume.

Kevin Cressy, NH Falcons – The 5-man was active inside contesting shots and pursuing the ball off the rim.  He also showed the ability to step to the perimeter and drill the mid-range jumper.