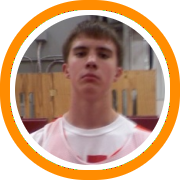 Patrick Ackerman (6-10 center) Middlesex Magic/Worcester Academy: Fundamentally sound legitimate big man who runs the floor well and hard consistently. Showed ability not only to finish well around the rim, but a nice jump-hook from the block and a smooth mid-range jumper. Rebounds well out of his area. Very skilled for his size, and will get better as body fills out. Many mid-majors showing interest.

Anthony Barry (6-5 combo forward) Middlesex Magic/Milford H.S.: Very skilled offensive player who attacks at the offensive end and uses strength well to finish at the rim. Aggressive player who seeks contact when getting the rim. Can score in bunches, and had 23 points in a pool-play game. Good mid-range shooter who plays very hard. Appears likely to re-classify to stay in high school an extra year. Lafayette, Patriot League programs have expressed interest.

Demitry Coronell (6-5 wing) Metro Boston/East Boston: Athletic wing with tremendous hops who threw one down in pool play that drew attention throughout the gym. Solid handle, able to lead break and initiate transition after a rebound. Dependable mid-range game and flashed ability to shoot the college three. Excellent at getting to the rim and finishing in traffic above the rim. Several A-10’s are interested.

Zach Chionuma (6-3 guard) Boston Metro/Marianopolis Prep: Explosive athlete, excellent transition player who attacks the rim, but showed ability to connect from college three stripe. Aggressive player in half court who is great at penetrating and getting to the rim. Needs to develop his skill set to fully take advantage of natural athletic ability. Interest from NEC to A-10 levels.

Dennis Clifford (6-11 center) Bay State Magic/Milton Academy: Very skilled center who has nice touch around the basket. Much improved over his appearance here in 2009, adding bulk and strength. Showed an ability to step out to 18-foot range and is a defensive presence. Had some dunks here off drop steps and makes long-range outlet passes. Legit big man who will get even better with more physical development. Has committed to Boston College.

Jarell Byrd (6-5 wing) Mass Thundercats-Warren/St. Thomas More Prep: Superb athlete who plays way above the rim. Provides a highlight-reel play in every game. Great timing on his jumps and always seems to get follow-up dunks. He would be perfect for a team that plays fast and presses all over. Huge sleeper who will play at prep level in the coming season.

Joe Bramanti (6-2 wing) Granite State Jayhawks/Andover H.S.: 6-2 combo guard who played some point. More comfortable off the ball, though. Good stroke and can get it off quick. Good body and loves contact. Smart, heady player who makes the right plays down the stretch. Had big efforts in his team’s victories here. Probably a good D-II prospect.

Mike Mitchell (5-7 point guard) Granite State Jayhawks/Milford H.S.: Only knock on him is his size, but coaches should look at what he can do more than what he can’t. A true point guard who is a magician with the ball. Finds teammates in good position with every pass he makes. Ability to hit long-range shots when open and to get into the lane and distribute. One of the most-creative ball-handlers here. Might wind up at prep school, or D-III level.

Ethan Oday (6-8 center) Drive4Stardum-Johnson/E. OSmith H.S.: Shot-blocking center with long arms. Reclassifying to remain a junior. Has strong right-hand baby hook in the post and superlative foot work. Possesses soft hands and finishes inside. Needs to add some bulk, but projects as an A-10 player when development is complete.

Samir McDaniels (6-4 shooting guard) Boston Warriors/New Mission H.S.: Shooter with size. Streaky with ability to hit shots in spurts. Gets to the basket when opportunity is there. Just a scorer. Plays hard on defense and is very active. Key to his team’s run to the championship round. Plays strong and crashes offensive glass. College interest beginning to develop, but looks like good D-II player.

Ousmane Drame (6-8 center) Boston Warriors/Marianapolis Prep: A lanky “big” who runs the floor and finishes in transition. Makes his best plays on the move. Showed the ability to step out and make jump shots. Great left-hand drop step, but still developing and refining his post moves. Plans to prep to get more exposure in the coming season.

Matt Droney (6-3 point guard) Boston Warriors/Catholic Memorial H.S.: A big, lefty and legitimate point guard. He sees the court very well and finds teammates in scoring positions. Very clever player who uses his intellect as well as his physical tools. Capable of producing offensive for himself, too, particularly when shooting over opposing guards in the lane.

Khem Birch (6-9 center) Expressions Elite/Notre Danme Prep: A real big-time prospect with tremendous potential and a great upside. Quick off his feet with long arms that help him block or alter shots. Can dominate boards at both ends. Often finishes with a dunk. Just a big, athletic player that has drawn major interst, including from UConn, Providence and many more.

Ricardo Ledo (6-4 Wing) Espressions Elite/St. Andrews H.S.: Very nice potential. A good-sized perimeter player who does many things well. He handles, passes and dishes on drives. Often looks to pass first and is a good passer. Needs to work on perimeter shooting, but when that comes he’s a high-major prospect. Big East schools, plus Kansas and Florida have expressed early interest.

Akosa Maduegbunam (6-2 off-guard) Expressions Elite/Charlestown H.S.: Good sized guard who is a terrific shooter with 3-point range. Played for a good team and provided perimeter shooting, plus an ability to go past defenders and get to the basket. Could develop into a high-major prospect. For now, mostly mid-majors (Drexel, Northeastern, Boston U.) have shown interest.

Gunner Bjornson (6-3 small forward) R.I. Hawks/Tiverton H.S.: A versatile offensive player who can score in a variety of ways. Has a decent jump shot and showed an ability to hit three-pointers, particularly when he gets his feet set. Also has strong moves to the hoop. A couple inches of growth would turn him into a D-I small forward prospect.

Pat Hopkins (6-7 forward) Academic Basketball Club/St. Joseph’s H.S.: Very active on the boards. He runs the court and finishes strong. Plays hard on every possession. A good defender who is willing to sacrifice his body to draw charges. He can also catch it on the perimeter, put the ball on the floor and go strong to the hoop. Does much of his scoring in the paint.

Isaiah Funderburk (6-6 Center) East Coast Fusion/Edison H.S.: A long, lanky (190 pounds) inside player who can score around the basket. Good low-post player who looks to have good potential. Already proficient on the defensive end with an ability to block or alter shots. Still developing his offensive game.

Joseph Connelly (6-1 guard) MABC Bengals-Black/Brookline H.S.: A very good shooter with range beyond the three-point stripe. A clutch player who isn’t afraid to make plays in key situations. Nice form on his shot. Likes to shoot from the wing and the corner. His shooting was a key aspect of his team’s victories here.

Darren Payen (6-7 power forward) East Coast Skills/Foran H.S.: A lefty, long-armed power forward who seemed to get better as the tournament progressed. A raw talent with shot-blocking ability. Had a near triple-double in one game. Under the radar, but not for long. Can dunk with ease. Clearly motivated to improve. Definite D-I potential.

Adam Bramanti (6-0 combo guard) New England Storm/Masconoment H.S.: Possibly the best shooter in the 16-under division. Crafty with the ball. Slender, but uses body well. Gets most out of his athletic ability. Made 10 3’s in three games here. Due to his endless range, court smarts and ability to make plays when needed he could be a scholarship player.

Goodluck Okonoboh (6-8 center) BABC/Tilton School: The biggest and arguably the best big man at the event, a legitimate 6-8, 210-pound force. He is a proverbial human erasor on defense and has a great offensive touch around the basket. Runs the floor hard and never takes a play off. Spearheaded a rally from a 12-point deficit in the championship game with several strong plays inside to start the second half and superlative defensive work. Has already gotten letters from UConn and LSU, and most definitely is a high-major prospect.

Rene Castro (6-2 guard) BABC/Beaver County Day School: Probably the strong guard at this event. He is a complete player who can shoot, play solid defense and even bangs inside for rebounds better than most guards. He provided instant offense throughout the tournament, but is also a terrific passer. Likely D-I prospect.

Wayne Selden (6-5 power forward) BABC/John D. O’Bryant H.S.: One of the strongest forward at this event, just a powerful rebounder who then delivers well-placed outlet passes. Shoots the ball well enough and can score off the dribble. Showed an inclination to play good hard defense. His solid 6-5 is well-used.He had 23 points in the semifinal-round game. Likely D-I prospect.

Austin Woods (6-6 center) CT BBall Club/Foran H.S.: He is a 6-foot-6 rebounding machine, especially at the offensive end. He never stops hustling. Very good passer for a big man. When needed he can finish well around the basket. An athlete who runs the floor well. Most definitely a scholarship player, possibly on the D-I level.

Khyla Rayner (5-9 guard) Rhode Island Breakers/Bishop Hendricksen H.S.: A small guard who can play either backcourt spot. He has a great pull-up jumper from out to 18-foot range. He handles the ball well enough to play the point and passes well enough to set up teammates. Also showed an ability here to drive and dish.

Justin Robinson (5-6 point guard) Kingston Komets/Kingston H.S.: A dimutive point guard who makes up for his lack of size with high-energy play and superior quickness. He is an excellent passer who makes teammates better. A good sense of anticipation on defense enables him to get more than his share of steals. Not afraid to take it inside against big defenders.

Quincy McKnight (6-0 guard) Connecticut Elite/St. Andrew’s H.S.: A combo guard who is effective at both spots. Plays with great energy and is very active on both ends. Has long arms and uses them effectively on the defensive end. High IQ that shows when at the point. Medium range on jump shot.

Charles Correa (5-8 guard) R.I. Hawks/St. Raphael Academy: One of the quickest guards at this event. A true point guard, a 5-8 dynamo, who makes everyone around him look better. Has range out beyond the three-point line, making that shot as well as anyone here. Already accomplished and looks like he’s going to get even better.