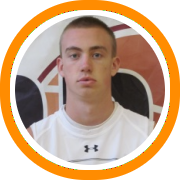 Glynn emerged onto the recruiting scene last spring and summer by leading the Magic’s 11th grade team in scoring and rebounding as they took a pair of spring titles and continued to play well deep into the month of July, scoring wins over the likes of Terry Porter Elite, Grassroots Canada, and Hoop Heaven Elite before heading to Orlando.

“Joey Glynn is as tough a competitor and as versatile an athlete as we have had in the Middlesex Magic program,” said Magic director Michael Crotty Jr. “He is a tremendous rebounder on both ends of the floor, and his athleticism allows him to be a lock down defender on forwards and guards. He can score the ball in a variety of different ways, and when he has an advantage situation he finishes powerfully high above the rim.”

Glynn has also distinguished himself on the high school circuit.  Last year he averaged over 20 points and 10 rebounds per game while leading Cardinal Spellman to the Division III South sectional title and being selected to the Boston Herald All-Scholastic team in the process.

“I believe that his [Glynn’s] will to win, work ethic, and toughness will allow him to make an immediate and profound impact at Bentley,” Crotty Jr. said.  “I have thought that Joey was a perfect fit for the NE-10 conference as a player, and more importantly, he has the opportunity to get a first class education at Bentley.”

Glynn is the third local New England product to commit to Bentley in the class of 2012 joining Cushing Academy post-graduates and Maine natives Tyler McFarland and Alex Furness.