Expressions Runs Away with u15 Chip 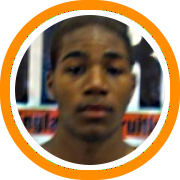 At the Columbus Day Challenge Tournament in Springfield this past weekend, a revamped ninth grade Expressions team won all their games by more than thirty points, including a 32 point win in the finals played at the Hall of Fame facility.

Miller (6ʼ9” F/C), perhaps the most dominating defensive ninth grader in the Northeast, has added to his ever growing offensive repertoire. In one contest he was 6 of 7 from the floor, hitting shots from 15 feet and beyond. Benzan (5ʼ10”PG) from the point guard position, saved his best game for the championship tilt, dropping 11 dimes and adding 12 points.  Shea (6ʼ5” F, 14 points in the championship) looked in top form running the floor well and consistently hit his midrange jump-shot. Conner (6ʼ3” G/F) showed off his explosiveness with a power dunk and almost brought the house down with a two-handed put-back that bounced out. He was also one the best rebounders all weekend long.

Falzon (6ʼ7” F, 16 points in the championship game) and Robinson (6ʼ5” G/F) added length and depth to a team already blessed with height. Falzonʼs long range air assault from beyond the three point line and Robinsonʼs attacks from above the rim lefttheir opponents without answers on the defensive end. Beaufort (6ʼ1” G) looks to be another valuable addition - a combo guard that is highly skilled at scoring along with the ability to handle the ball.

Guard play was also a strong component for Expressions as Rodriguez (5ʼ10”) and James (5ʼ10”) played extremely well. Rodriguez, a physically strong two guard, was equally tough on defense, and on offense often bull-rushed his way to the rim. Jamesʼs game keeps improving on offense as he continues to contribute on the scoring end. Kaufmann, (6ʼ6” F) came off the bench and scored repeatedly from the high post.

Other champions from the Columbus Day Challenge included Lynchburg Hoops in the open division, the Rhode Island Hawks in the u17 division, and Expressions Elite in the u16 division.