Enoch is a Prospect on the Rise 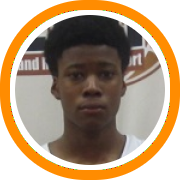 It was last September that Steve Enoch arrived at the New England Elite 75 Showcase – Frosh/Soph Edition as a virtual unknown, but by the time the day had come to an end it was clear that he was a talented youngster with a bright future.

Enoch’s performance at the Elite 75 – Frosh/Soph Edition earned him an invitation to this summer’s 8th annual New England Elite 75 Showcase, where he took the court along with 74 of the other top prospects in New England.

While his selection was initially met with some skepticism after playing very few minutes during the high school season, he quickly proved his worth, even as one of the youngest players in the field, with his combination of size, length, athleticism, and signs of skill.

In the one month since, Enoch showed that same talent and upside to a growing list of college coaches, as the rising junior added his first three division I offers by virtue of his play during the recent July evaluation period.

“The fact that stands out to me is that he hasn’t even really played varsity basketball yet and he’s improved so rapidly in the last four or five months,” Team Up head coach George Matthews said.  “He’s worked so hard every day and now he’s starting to see the rewards of that.”

Enoch opened his July evaluation period at the Hoop Group Elite Camp, where college coaches were already tracking his scent based on the reports coming out of the Elite 75, and it was just one day after camp came to an end that Sacred Heart became the first division I school to offer him a scholarship.

The second offer wouldn’t be far behind, and this time it came from another local school.  Fairfield had already hosted Enoch for their Elite Camp in late June, and after watching him at Hoop Group and then again with Team Up at AAU Nationals, they decided they had seen all they needed to see to pull the trigger.

The third and latest offer didn’t come until yesterday, Sunday, when Enoch attended the Iona Elite Camp.  This was his second trip to the MAAC campus after he and his Norwalk team attended the Iona Team Camp in late June.  This time, he wouldn’t be able to get off campus before claiming his latest offer.

With three offers now in the bag and additional interest from the likes of Northeastern, Hofstra, and Norfolk State, Enoch’s recruitment could very possibly get a lot busier before it starts to slow down.  After all, he’s yet to play any serious minutes at the high school level and still has his best basketball very clearly still in front of him.