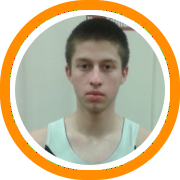 A year ago Ian Sistare was the kid from New Hampshire that people were just starting to find out about.  Now, after reclassifying at Northfield Mount Hermon, he’s back for another freshman year but playing with the type of poise and decision making you would expect from a veteran.

His floor game is very mature for a still young player and he had the presence to let the game come to him on Saturday instead of getting caught up in trying to prove what he could do.  While he picked his spots to knock down deep threes, score above the rim and hit jumpers from the mid-range area, he was also moving the ball and facilitating for his teammates with his passing skills.

KeAndre Fair, Master’s (CT) – He’s been a fixture on the high school circuit since his days as a middle schooler.  Fair is highly skilled, super smooth and able to operate with his jumper or handle.  He’ll be one of the most impactful guards in his class this season.

Charles Fisher, St. Joseph’s (CT) – He made a big impression in his debut exposure event – attacking off the dribble to both sides, running his lanes hard in transition, showing touch on his jumper, being active on both ends, and getting after it defensively.

Ikenna Ndugba, Brooks (MA) – A quick and attacking guard, Ndguba may still be a freshman but he’s no stranger to the grassroots landscape after making his mark at this event last year.  He’s a high level playmaker with the ball in his hands and able to blast the jets at any point.

Kaneef Danzy, Albany Academy (NY) –He made the long trip from Albany, New York and was determined not to go home empty handed.  A spot in the top 20 all-star game is all that would do following a balanced performance that saw him score the ball in a variety of different ways.

Mike Nelson, Bishop Feehan (MA) – One of the big surprises of the event, Nelson showed both good shooting range from the perimeter along with deceptive athleticism attacking the basket and finishing.  He made good decisions and had a heady overall floor game.

Keyshaad Dixon, Braintree (MA) – Raining threes from all over the court, Dixon showed that he can do much more than just score around the rim. With deceptive speed and a quick first step, he picks his spots well and knocks down jumpers at a very high rate.

Christian Vital, Rectory (CT) – Evaluators were taken by his economy of motion when attacking the basket as he pushed the ball out in front of him in the open floor and utilized long strides to blast through the lane.  His size for the backcourt and the consistency of his pull-up were other weapons.

Keyshawn Jacobs, Beaver Country Day (MA) – A budding point guard with all the necessary ingredients to develop into a good one, Jacobs has instinctive feel for the game, is shifty with his driving game, and capable of drilling open jumpers with range.

Nick Lucakviecz, St. John’s Prep (MA) – A highly efficient guard who is ideally suited for the drive and kick game, Lucakviecz strokes it from the outside and was as heady of a penetrate and pitch passer as there was in the field.

Brandon Hurst, University (CT) – He’s a breakdown style guard with a powerful, bulldog body and the corresponding motor to match.  He puts immediate pressure on the opposition on both ends of the floor and is able to get wherever he wants with his dribble.

Jackson Zimmerman, Bishop Guertin (NH) – He’s not yet the type of physical prospect who is going to jump out at you, but Zimmerman is a fundamentally sound and highly skilled player with an excellent understanding of how to play the game the right way.

Justin Leip, Rivers (MA) – Being a bit undersized doesn’t hinder him in the slightest, especially when he forces his defender to stay with him all the way out to 23 feet because of his ability to make shots in bunches from deep.

Brendan Hoban, Watertown (MA) – Speaking of shooters, Watertown has their latest long distance dialer and this guy fires so well that he brings back memories of Cory and Kyle Stockmal bombing away for Watertown.

Shyheim Ulrickson, Mt. Ararat (ME) – He’s undersized and a growth spurt away from being a player but he has the instincts and skills to play on or off the ball and really excels when given the ball in the open floor.

Deron Hughey, East Catholic (CT) – He’s got a nice frame for the game with good length and quick jets.  He’s really tight with the ball and can explode from point A to point B without disrupting the smoothness of his ride.

Other Guards that Impressed: