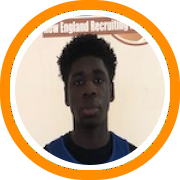 Today we will preview the wings in the field who impressed.  As there are every year at the Elite 75, there are breakout performances from student-athletes of whom college coaches are not familiar with when they walk in the door, and there are performances by those who have been seen more extensively, but show drastic improvements in their game.

Wings are versatile in their skillsets and ability to impact the game on both ends.  Both offensive skillsets and the ability to guard multiple positions are becoming more and more important at the next level, and these standouts proved they are on the right track to be able to execute this at the college level.

Trace Gotham (St. Sebastian's School, 2020)- One of the breakout players of the event, Gotham looked better and better each time he took the court.  His long arms allow him to finish inside with different arm angles that are difficult to contest, and he hit three floaters on the move in the paint in his last game set.  Gotham cuts hard & makes the extra pass-- something not lost on college coaches in attendance.

Jaylen Davis (New York Military Academy, 2020)- The 6'6 wing is a powerful athlete who uses his strength to grab contested rebounds and loose balls.  He is a capable straight-line driver who blows past his defenders' hip.

Gabe Charleston (Cromwell HS, 2020)- A great athlete, Charleston skies for rebounds on the defensive end while grabbing the ball at his highest point.  He is a wing who uses his athleticism not just to show off his highlight-reel dunks, but to affect the basketball game to help his team win.

Evan Parker (South Burlington HS, 2020)- Parker is a threat to shoot whenever he touches it.  He gets his shot off quick and is not afraid of stepping confidently into his shot.  He is intense on the defensive end and takes pride in shutting down his man.

Will Campbell (Cushing Academy, 2020)- The lefty wing steps into his shot and has a high release that makes it difficult to contest.  He also shot-faked several defenders, and he showed he can either pull-up or find the open man if the next defender steps up in help.

Jason Mahoney (Governor's Academy, 2020)- A slasher, Mahoney is a definite stock-riser. He got to the rim at will and went by his defenders with an array of dribble moves and quick first step.  He is always moving off the ball and always ready to attack closeouts when he catches the ball.

Andy Christos (Vermont Academy, 2020)- A big playmaking wing, Christos has the size (6'6) and versitilty to play 2-4. He showed an advanced skillset for his position and has a high IQ to match. He can score from all 3 levels but also is sneaky athletic.

Jalen Gorham (MacDuffie School, 2020)- Gorham runs the floor effortlessly.  More than almost any other player in the field, he uses his length to rebound & block shots (seemingly coming out of nowhere).  He is an exceptional offensive rebounder & takes pride in giving his team second (and sometimes third) chances.  Some college program is going to be very happy to have Gorham running the floor, rebounding & protecting the rim for them.

Josh Reaves (South Kent School, 2020)- The stocky perimeter player showed tremendous improvement since the conclusion of the high school season.  His footwork is quick into his pull-up, and he can stop on a dime to get it off.  Always a stronger player, Reaves now uses his physicality on the defensive end to chest up, jam cutters, and rebound.

Dan Braster (Cushing Academy, 2020)- Known as a shooter, Braster showed off an evolving handle on Thursday night.  He is much more comfortable with the ball in his hands, and even pushed the ball in transition himself off rebounds.

Kuany Teng (Bradford Christian Academy, 2020)- An effective driver due to his change of speed, Teng also elevates quickly off the floor to block shots from the weak side.

Justin ONeill (Bedford HS, 2020)- Standing at 6'6, O'Neil impressed by staying low into his shot, and by demonstrating proper footwork on shots moving to his left and right, something many high school players struggle with from 3-point range.

Declan Nugent (Berwick Academy, 2020)- Nugget has a soft midrange touch (in addition to being able to space the floor from deep).  Similar to O'Neill, Nugent impressed by being able to make 3-pointers on the move using quick footwork.

Harrison Latimer (Pingree School, 2020)- Latimer's skill level is much improved.  He put it on the floor in the open court more often than we have seen.  He makes tough plays and is an upstanding teammate, as well.

Max Mitchell (Notre Dame Fairfield, 2020)- Mitchell has grown into his body, slimmed down, and become a more functional athlete as a result. He was aggressive and versatile offensively, able to put it on the floor and score at three levels, with versatile defensive potential.

Anthony Morales (Beaver Country Day School, 2020)- The long wing continued his strong play from the spring.  His defensive versatility was on display, as he uses his length & quick feet to guard smaller players outside, but can also defend the post (1-on-1 and in help side).

Timmond Williams (Trumbull HS, 2019)- The 6'4 Williams is long & athletic, and uses that to take big strides to get to the basket with ease.  He shot the ball at an improved clip, as well, and made plays off ball screens to get his teammates involved.

Jalen Graham (Hyde, 2020)- Graham had a great night at the rim.  He blocked several shots and made sure every shot taken in his area was contested.  He elevated to score at the rim off dribble penetration and off offensive rebounds.

Ben Onek (Phelps School, 2020)- The athletic lefty moves well laterally and uses his length to contest his opponent's shots.  His shooting off the dribble has noticeably ticked up, which should open up more driving lanes for him.

Jordan Richard (Lawrence Academy, 2020)- The physical wing has a tendency to fly under the radar sometimes, but he shoots with a lot of confidence, makes contested shots, and doesn't need much room or separation to get it off.  Always playing hard and always competing, Richard is a glue guy that will be a valuable piece at the next level.

Kyle Layman (Tilton School, 2020)- Layman brought his usual toughness, grit, and hard work to WPI on Thursday night.  He is a good passer from the high post and baseline and does not try to force the action when it is not there.  He may not lead his team in scoring, but his smart & tough style of play is a must-have on any team.

Earl Tucker (Milton HS, 2020)- The 6'5 wing showed signs of development on Thursday night.  He can score in a variety of ways, and made some passes that we haven't seen before.  Tucker is very talented, and is just starting to scratch the surface of his potential.