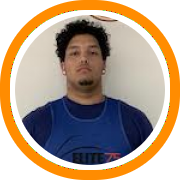 Today we will preview the big men in the field who impressed.  As there are every year at the Elite 75, there are breakout performances from student-athletes of whom college coaches are not familiar with when they walk in the door, and there are performances by those who have been seen more extensively, but show drastic improvements in their game.

As the traditional "center" & "power forward" positions necessitate a more versatile skillset than in the past at the next level, the following prospects will not be pegged simply as "big men" who are limited to the paint.  Many of these prospects possess the tools to influence the game both from the paint and the perimeter.

Ryan Rubenskas (Bridgewater Raynham HS, 2020)- One of the new names to emerge, Rubenskas holds one of the more unique stories in the field.  Standing at 6'7, he is a 3-sport athlete (football, basketball & lacrosse) for BRHS, and one that does not play on the grassroots circuit at all.  A relative unknown coming into the Elite 75, Rubenskas not only made shots from all three levels, but worked to get good position on the offensive & defensive glass, played hard on both ends, and slipped screens when his defender overplays a screen.  Even without playing high-level grassroots basketball, his IQ & understanding how to play is something that college coaches were immediately impressed with.

Ryan Biberon (St. Andrew's School, 2020)- The 6'7 incoming post-graduate from CT, Biberon keeps his game simple-- rebound, finish, repeat.  He is a true post player in a time when many front court prospects shy away from contact inside. Very effective on the offensive glass, he has a deceptive quick second jump during which he gathers the basketball & puts it back with either hand.  His soft touch with his left & right hand and the efficiency of his game had college coaches scurrying through their packets.

Justin Oliveras (Salsbury School, 2020)- Oliveras is a wide-bodied post who gives great effort on both ends.  He has great hands to go along with a soft touch inside.  He uses his body to get great position when battling for rebounds on both ends of the court.

Keller Boothby (Wilbraham & Monson School, 2020)- An incoming post-graduate from Texas, Boothby rebounds well against bigger players inside but is more than capable of stepping outside and making plays for himself and others.  He has 3-point range is was one of the better passers from the high post in the field.

Justin Norkus (Milbrook School, 2020)- Standing at 6'8, Norkus' ability to put the ball on the floor and attack closeouts impressed throughout the night.  As he showcased the ability to finish inside with either hand and play off two feet inside, Norkus' capability as a prospect for the next level keeps growing.

Aiden Luckey (Leominster HS, 2020)- With room to add more weight to his frame, Luckey has good touch inside and showed off several sophisticated post moves during the breakdown session.  He has a good feel for where his defender is playing him, and he utilizes his drop-step move effectively.

Guy Ragland (Northwest Catholic, 2020)- Ragland has been a staple on the grassroots scene in recent years, but his expanded game is what coaches noticed here at WPI.  He is a scoring threat at all three levels, and is better equipped to put the ball on the floor.  Ragland also showed promise as a passer off two feet when he drives the ball into the paint.  In addition, his tenacity & effort on defense and on the boards stands out.

Fabian Cox (Notre Dame West Haven, 2020)- The 6'7 forward passes very well to the weak side when posting up.  He is a big man who does not get tunnel vision and sees the whole court & what opportunities his actions inside can trigger for his teammates.  His teammates will realize that they will get a good shot if they moves without the ball after they enter it inside to him.

Niko Rocak (Phillips Exeter, 2020)- Rocak's ability to guard outside compliments his inside tools very well.  When switched onto guards, he proved able to hold his ground, keep his opponent in front of him, and force a tough shot.  This versatility on the defensive end only helps all front court players' value, including Rocak.

CJ Holmberg (Bancroft School, 2020)- The physical big with a broad build showed a versatile game.  His range has increased out to the 3-point line, and he still performs many of the traditional "big man" duties, such as rebounding, providing early help and meeting select shots at the rim to turn them away.

Stephen Ward (Beaver Country Day School, 2020)- Ward's face-up game has improved to the point in which he is a threat to make midrange jumpers when the ball is entered into him.  His high motor impressed many coaches in attendance, and is a big reason why his rebounding numbers are translatable to the next level.

Declan OSullivan (Catholic Memorial, 2020)- O'Sullivan confirmed parts of his game we have known for a while-- he is an efficient big who rebounds at a high rate & sets great screens that gets his teammates (and himself) open for clean looks.  But on Thursday he displayed improved range on his jumper with his ability to step out & hit shots from outside the 3-point arc.