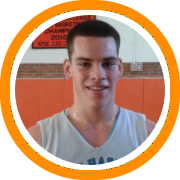 Kimball Union Academy senior forward Devin Gilligan made a verbal commitment to Augustana College this weekend while on their campus for an official visit.

Augustana College is a private liberal arts collegel in Sioux Falls, South Dakota and a member of the Northern Sun Conference, considered to be a highly competitive division II league.

“Augustana combines academic excellence with outstanding athletics,” Gilligan said.  “They made my visit special and I am very appreciative for this opportunity.”

Gilligan, who transferred to KUA last year after previously starring at Souhegan High School in New Hampshire, is an aggressive six-foot-five forward who has taken his game to new levels in the last year, adding a consistent skill set to his rugged interior capabilities.

“Devin plays as hard as anyone,” KUA head coach Mike Olson said.  “He excels as a defender and rebounder.  He can guard multiple positions, which makes him invaluable.  He is also an efficient scorer.  He doesn’t need many shots to put points on the board.”

Gilligan is the second KUA product to make a commitment this week following Devon Thomas’ verbal pledge to Missouri State on Thursday.