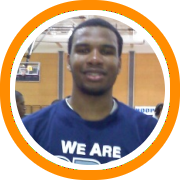 28 teams from Western Connecticut make the trip to Trumbull on Sundays for what has developed into one of the state’s top fall leagues.

The New England Recruiting Report was on hand this Sunday to check out the action including a match-up between two of the teams that are projected to be among the CIAC’s best this year in Bassick and St. Joe’s.

Greg Langston led St. Joe’s to a 15-0 run to start the game as they swarmed Bassick with their full court pressure.  Langston rattled off 5 consecutive points of his own by swishing a three-pointer, picking off a pass in the press, and then finishing his break away by cocking back a one handed slam.

But Bassick would fight back and gradually chip away at the lead until the score was tied at 27 just prior to halftime.  The second half went back and forth with Bassick taking a slim one point lead with only 30 seconds left in the game.  But Langston stepped up again, driving the ball to the middle of the floor before spinning into a double clutched jumper that gave his team a 48-47 lead and proved to be the game winner.

Bassick got well balanced contributions throughout the course of the game, although Kyle Geer was the prospect who showed the most upside.  With a strong and athletic frame to go along with above average handle and passing skills, Geer could have a big junior season in Bridgeport.

James Jennings made things happen for St. Joe’s throughout the game as he drove the ball wherever he wanted and showed a good stroke from behind the three-point line.  Timajh Parker-Rivera anchored the team defensively, coming up with a few fierce blocked shots with his left hand while showing an improved shooting touch on the offensive end.

Here’s a look at some other players who have shined at various points during the fall league:

Phil Gaetano; Sheehan HS – One of the top pure passers in the CIAC, Gaetano has been showing his ability to score the ball including a 29 point performance this week.

Avery Pennick & Julian Sanders; Trumbull HS – A nice one-two punch in the backcourt, Pennick is a strong combo-guard with a good pull-up jumper and Sanders a guy who can handle the ball and make open shots.

Darren Payen; Foran HS – The six-foot-seven lefty has shown some flashes of being a poor man’s Zendon Hamilton (former St. John’s star) with his lefty skills and deceptive athleticism.

Oscar Assie, Brandon Jones, Pat Hopkins, & Sam Wilson; St. Joseph’s HS – St. Joe’s is deep beyond their big three.  Assie wasn’t in the line-up Sunday but has been a consistent interior presence while Hopkins continues to do the dirty work down there.  Jones and Wilson are solid guards who would be stars on lesser teams.

Jeremy Daniel; Bassick HS – The little guy is the engine that makes this team go.  He’s been a little up and down but when he’s at his best Bassick is hard to beat.

Tom Bajda, Casey Woodring, & Arkel Miles; Notre Dame HS Fairfield – The sophomores are super talented as Bajda has shown his customary smooth skill set, Woodring his shot making and efficiency, and Miles the size and strength to anchor the interior.

Dan Upchurch & Earl Coleman; Notre Dame HS Fairfield – The new kids on the block are just as talented as last year’s freshmen as Upchurch has great poise running the team for a frosh and Coleman the physical tools to set himself apart from his peers.

K.C. Hoff, Brandyn Benson, & Daryl Best; Career Regional HS – The youngsters are growing up and Hoff has emerged into someone who can create his own shot, Benson a steady and intelligent presence from the point, and Best still showing flashes from the post.

Gerald McClease, Alex Conaway, & Ray Melvin; Wilcrus Cross HS – McClease has continued to score the ball in high volume but Conaway has really emerged this fall, picking up the confidence to begin to maximize his potential.  Junior guard Melvin has shown he has the ability to be the final component of the three headed monster.

Brian DeBisschop; Cheshire HS – He’s continued to grow and now stands a legit 6’6” with the skills to handle and pass the ball while scoring within the flow of the offense.

Anthony Henry, Abbott Tech HS – An athletic wing that can handle the ball and has a high upside as he continues to learn the game and develop his skills.

Brandon Sherrod & Russell Payton; Stratford HS – Sherrod has been as good as advertised dominating the paint and Payton proving himself to be a more than capable running mate from the perimeter with his shot making and playmaking skills.

Josh Dugas; St. Luke’s – He’s been consistently solid all fall, showing an improved perimeter stroke with his normal headiness and efficiency with his dribble.

Ronnie Underwood & Troy Owens; Kolbe Cathedral HS – Underwood can make plays with his dribble and defensively while Owns is an under the radar undersized guard who is super quick and gets wherever he wants.

Bryan Galvin; Ridgefield HS – He’s been productive creating for himself and others with his dribble, has shown an improved shooting stroke, and hounded the ball defensively.

Sean Dempsey; Notre Dame HS West Haven – A pure point guard with a high apprehension for the game, Dempsey has teamed with Gaetano to form a tremendously heady one-two punch.

Ryan Kolb; Holy Cross HS – When on hand Kolb has been one of the most productive interior players in the field.  He can make shots from the perimeter, attack the rim, and score in the paint.

Scott Moran; Amity HS – A tough and strong guard, Moran has been productive in the backcourt with his ability to handle and score the ball.

Andrew Kimberly & Brett Kumins; Fairfield Ludlowe HS – Kimberly continues to progress on the interior while Kummins is as solid and steady as they come.

Dennis Levene; Weston HS – A very talented big man who can score outside and in, Levene has three-point range on his jumper and is slowly becoming a more consistent scoring presence inside the paint.

Ryan Swedberg; Fairfield Warde – A solid guard who puts his stamp on the game with his ability to stroke the ball from behind the three-point line.

Bobby Bier & Steve Goolish; Fairfield Prep – Bier has come into his own recently showing a solid all around game while Goolish is a counterpart in the frontcourt who can score inside and out.