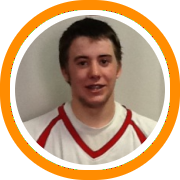 The top ranked senior in Vermont will be staying in the Green Mountain State for four more years as Matt St. Amour is reportedly heading to Middlebury next season.

His senior season at Missisquoi High School was one for the record books as he was named the Gatorade Player of the Year for the second consecutive year and became just the sixth player in state history to score over 2,000 career points.

A product of the Lone Wolf AAU program, St. Amour is highly skilled with good size for the backcourt and a terrific feel for the game.

He’ll be joining a Middlebury squad that competes in the NESCAC, one of the best leagues in all of Division III basketball, and is coming off a run to the Elite 8 of the NCAA Division III tournament.

The New York native arrived at KUA for his junior season and has been a key part of the rotation ever since, seeing time in 54 consecutive games.  While he may be best known for his three-point prowess, Eiber has also proven to be an incredibly steady decision maker, committing just 3 turnovers in 380 minutes of action.

Brandeis also competes in one of the nation’s top Division III basketball leagues, the UAA, which consists of a group of similarly prestigious academic schools.

A graduate of Gloucester High School in Massachusetts, St. Peter’s game has improved by leaps and bounds in recent years.  He’s gotten himself in better shape, has continued to assert himself as a tenacious rebounder and post defender, and also developed the offensive versatility to be a threat at the low post or with his elbow jumper.

Babson competes in the highly competitive NEWMAC, featuring some of the top division III programs in New England.

The University of New England has picked up a verbal commitment from Dough Gemmell, a senior forward from Central Catholic High School and the New England Storm AAU program.

Gemmell will join a UNE program that is rebuilding under head coach Ed Silva, who just finished his first season at the helm of the program after having previously led Elms College to seven consecutive NCAA tournaments.

Gemmell will add to UNE’s frontcourt depth by providing a battle tested and versatile forward capable of competing for time in the rotation right away as a freshman.

Ruffen is a skilled swingman who makes threes and mid-range jumpers alike.  He has been a four year member of Salem’s varsity team and starred for the Storm since the 7th grade.

Under head coach Rob Sanicola, St. Joseph’s has proven to be one of New England’s most consistent division III programs in recent years, having finished above .500 in each of the past nine seasons.

Denzell Jackson will be headed to Nazareth College in the fall. The 6'4" face up forward did a lot of the dirty work for the Tigers this last season, helping lead the team to a 20-4 record and the Class B NEPSAC Championship.

On the season, Jackson averaged 6 ppg to go along with 6.5 rpg for the Orange and Black. He is the fifth member of the Sufield senior class that who be playing at the next level, joining fellow seniors Kendall Jackson (Columbia), Mack Montague (Rochester), Jack Fay (Brandeis), and Colin Pascoe (Conn College).

This past season Nazareth finished 15-10 (7-7 in the Empire 8 Conference). Jackson will certainly bring toughness and a physical frame, which will translate well to the next level.