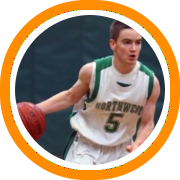 Rick Naylor, a 6’2” guard from Kimball Union Academy, has committed to Trinity College and head coach James Cosgrove. Naylor is a skilled two-guard who connected on 51% of his three point attempts this year. He figures to compete for playing time early in his career.

Naylor was a two year starter at KUA. He averaged 12 points a game this season as KUA finished with a 21-6 overall record and a quarterfinal appearance in the NEPSAC AA tournament. Naylor was named honorable mention on the all-league team.

“Rick Naylor is a great leader and a superb teammate. He is an exceptional defender, he’ll rebound and he is skilled,” said KUA head coach Mike Olson. “We appreciate all he has done for our program and know he’ll be a great addition at Trinity.”

Northwest Catholic guard Tyler Huffman has committed to Clark University.  The Connecticut native had a stellar career on both the high school and AAU levels.

At Northwest Catholic, he has been a four year starter who earned all conference honors as a senior after averaging 14 points, 6 assists, and 4 steals per game.  However, those numbers rose to 22 points, 8 assists and 6 steals over the last seven games of the season.

On the AAU circuit, Huffman starred for Aim High, helping the program to a breakout season on last summer’s local AAU circuit.  He committed to Clark over Catholic and UC Riverside – where he reportedly had an offer.

Vermont Academy’s back-court duo of Jack Mackey and Troy Davine both made commitments within the last week.  Both players are coming off successful senior seasons that saw them provide key contributions to head coach Jesse Bopp’s squad.

Mackey is heading to Wesleyan University next year where he will bring the same toughness, tenacity, and skill set that proved so valuable to this year’s Vermont Academy team.  The Cardinals are coming off a huge season in the NESCAC and expected to be one of the pre-season favorites in the league heading into next year.

Davine, a local product from Rutland High School, will be staying in Vermont for the next four years after accepting a recruited walk-on spot at the University of Vermont.  Davine proved himself to be a scholarship level talent this year at VA, accumulating interest from both division I and division II schools, but ultimately decided to follow in the footsteps of guys like Clancy Rugg and Pat Bergmann, two other local products who worked their way into the Catamounts rotation after initially committing as recruited walk-ons.

Davine wasn’t the only local product to commit from the state of Vermont.  Anthony Granai and Tim Rensch, two other products of the Lone Wolf Athletic Club, have committed to Macalester College and Scranton respectively for next season.

Granai was the leading scorer for Colchester High School this season at just over 14 points per game and a four year letter winner for the school.  He also averaged 6 rebounds, 4 assists, and 2 steals per game while being named third team All-State, first team All-Metro Conference, and being selected for the North squad in the annual North/South All-Star Game.

A 3.8 student in the classroom, Granai took a course load that included 5 AP classes this year and said he, “can’t wait to take advantage of the academic opportunity that Macalester has to offer.”

Rensch is a skilled big forward coming off a highly succesful career at Rice Memorial High School where he captured a state championship during his junior season.

Deering High School guard John Amabile has reportedly committed to, and deposited at, the University of Southern Maine.

Amabile punctuated a successful four year career by averaging 19 points per game as a senior.  He was named an MBR All-Star in the state in all four seasons and also a First Team All-Star by the Southern Maine Athletic Association as a sophomore, junior, and senior.

The scoring guard is known for his ability to put points on the board and connect from behind the three-point line and will look to make an immediate contribution in the Little East Conference.

Former Ohio State and Boston College head coach Jim O’Brien has completed his first recruiting class since taking over the helm at Emerson College and it is a big one with ten different players on their way to Boston.

The group includes seven New England products including Newton North guard Mike Thorpe whose numerous post-season accolades include being named MVP by the Bay State League, all-state by ESPN Boston, and All Scholastic by both the Boston Globe and Boston Herald.

St. John’s Prep guard Michael Carbone is also on board after being named a Salem News All-Star, Catholic Conference All-Star and Boston Globe All-Star in his senior season.  He’ll team with Tyson Hallowell from Middlesex School who earned post-season honors from both the ISL and the NEPSAC while also being named to the Boston Globe’s West Prep School Starting Five.  Boston College High School’s Michael Corcoran is the fourth Massachusetts backcourt product heading to Emerson next year.

Vermont native Jon Goldberg will transfer in from St. Lawrence University and have two years remaining while Avon (CT) High School’s Jacob Forchheimer is also on his way after being named an all-star in the North Central Connecticut Conference.  Bobby Gagnes, a six-foot-one guard from the Hun School in New Jersey has also committed.

Coming off the best season in school history, Albertus Magnus has reloaded with a recruiting class that recently added Gerald McClease and Tony Dobbinson to an already committed Kenny Armstead from Career.

McClease is a graduate of nearby Wilbrus Cross High School who recently completed a post-graduate year at Trinity Pawling.  The six-foot-three forward was generating interest from the division I and II levels until he tore his ACL during his senior year in high school.  After playing a full season at TP, McClease is gradually regaining the explosiveness that helped to make him one of the best seniors in the CIAC last year.

Dobbinson is a five-foot-eleven scoring guard from Westhill High School in Stamford, Connecticut.  Extremely fast and athletic, Dobbinson is the prototypical playmaker who creates scoring opportunities for both himself and his teammates.  He was named all-state in the CIAC this year after putting together a breakout senior season.

Torrence is a quick guard who can make things happen on both ends of the floor.  He has a tight handle and the ability to thread the needle with his passing skills and is also an excellent on the ball defender.

For the second time in as many years, Union College has landed a perimeter sniper out of the Kingswood-Oxford School, landing a recent commitment from Zach Restifo, who will join former teammate and rising sophomore Mike Deffley.

Restifo is coming off a big senior season at K-O in which he led the team in scoring and earned second team All NEPSAC honors in Class B.

Restifo was one of Class B's most dangerous perimeter marksmen this year while also showing the versatility to play either backcourt spot and create his own shot off the dribble.