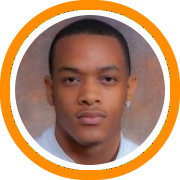 Gould Academy's first season in Class AA of the NEPSAC was nothing short of a successful one as they established themselves as a well-coached program on the rise with a commitment to individual development.

If the winter was good though, the spring has been even better as two post-grads have now gone on to earn late division I scholarships.

The first came when George Papas, who went vastly under-recruited for most of the season, accepted a four-for-five offer from Monmouth University in his home state of New Jersey.

Johnson is a uniquely talented big man who has both great mobility and touch at 6-foot-10. His upside is significant and he made great strides this year in terms of learning the maturity and everyday mentality it takes to turn potential into consistent production. As he continues on that journey, his best days should be ahead of him.

Johnson becomes the fourth member of Gould's 2017 class to move on to the college level and third to commit to a D1 school following Papas and Skyler Nash (Vermont).