Catching Up On Orlando 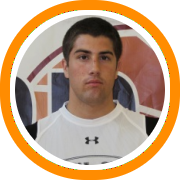 While the New England Recruiting Report was anchored out west in Las Vegas, things were also getting off to a fast start in Orlando with Super Showcase tournaments taking place in the freshmen, sophomore, and junior divisions.

The junior division is set to crown their champions on Wednesday with BABC still alive in the 32 team invite only gold division and scheduled for a 3pm semi-final against Hoop Heaven Heat Elite from New Jersey who local New England fans may recognize from both the Memorial Day Invitational and the Super 16 Showcase.

BABC’s first round match-up proved to be their most difficult thus far as they ran into SYF Players and Mitch McGary, only to survive by a 55-54 margin thanks to Jaylen Brantley’s half-court buzzer beater.  The Individual match-up between McGary and Nerlens Noel drew head coaches from North Carolina, Kentucky, Louisville, West Virginia, Georgetown, Maryland, Florida, Duke, Pittsburgh, and UConn according to Scout.com’s Brian Snow but it may have been Jake Layman who stole the show as Snow noted “He just keeps on getting better and showing that he was one of the more undervalued recruits in the nation coming into July.”

The Boston Warriors went 2-1 to win their pool and advance to the silver bracket where they met an untimely match-up with the Chester Panthers.  Kachi Nzerem and Matt Droney both averaged over 20 points per game through pool play while Ryan Jann went 9-13 from behind the arc in the first two games and Kenny Reed went for a triple double in the Warriors’ second win.

The Middlesex Magic are still alive in the bronze bracket after finishing second in their pool and then scoring three straight wins in bracket play, the toughest of which came over local New England rival Maine Mac in a 68-67 nail biter.  Connor Mahoney has been paramount of the Magic’s run, playing some of the best basketball of his summer and attracting attention from Patriot and NE-10 schools in the process.  Anthony Barry, who holds multiple NE-10 scholarship offers, provided the late game heroics against Mac, making the game winning free-throw with ten seconds to play to finish with 17 points.  Meanwhile Joe Glynn continues to accumulate a strong division II following of his own after putting up 15 points and 14 rebounds.

Representing New England in the semifinals of the copper bracket is MB Nation, who found themselves in a particularly tough pool with both New Jersey Hot Shots as well as Mid-Atlantic Select.  They’ve scored wins over Columbia Ravens, Each 1 Teach 1, and Cincinnati Royals since heading to bracket play with Liam Langaas dropping 28 points and 7 threes against the Ravens, Alex Furness going for 20 points against Each 1 Teach 1, and Chris Braley and Harry Rafferty both topping 20 points against the Royals.

Also still alive are the Rhode Island Hawks who are set to play this morning in the semifinals of the iron bracket.  They dispatched of a talented New York Falcons team in the opening round then made short work of Prime Time Targets and N.C. Team Disciples setting up a match-up with New Jersey Elite in the semis.

The Rhode Island Hawks were also the story in the Sophomore Super Showcase, advancing to the quarterfinals of the silver bracket.  Charles Correa went for 22 points and 5 threes against the Shining Stars while Colin Pascoe led the team with 20 points against the Columbia Ravens.  Tom Rivard and Ben Engvall also stepped up to lead the team in scoring in other games along the way.  Henry Bolton and Max Motroni have also consistently found themselves in double figures.  Expressions Elite also made a run in the Sophomore showcase, advancing to the quarterfinals of the bronze bracket before falling to the Michigan Warriors.

In the Freshman Super Shwocase, BABC looked to cap their season with another title but were stopped in the finals by Ty Lawson Team Takeover after scoring wins over Team United, Florida Family, Dorian’s Pride, and Team Heat.  Connecticut Select also made a nice run, advancing to the quarterfinals of the bronze bracket.