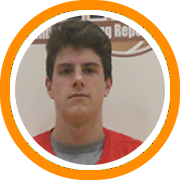 Bickford follows in the footsteps of former Portland High School guard Terion Moss to become the second Blue Wave prospect to commit to head coach Richard Barron in the 13 months since he has been at the helm of the program.

“I feel like I was able to make my commitment early because this my home state, they had my major and I have family close by,” Bickford told the Bangor Daily News. “It seemed like the perfect fit for me, especially after I went up and visited. It was a pretty easy decision.”

Bickford is a three-year starter and the top ranked local product in the Maine state association.

While Sanford has struggled in recent years, Bickford has had a decorated individual career to date.

He was a SMAA All-Rookie selection as a freshman before averaging 14 points and 9 rebounds as a sophomore while earning All-SMAA honorable mention. This past season, Bickford pushed those numbers to 18 points and 11 rebounds per game and earned first-team All-SMAA in the process.

While he was already well-known within Maine's borders, Bickford was just starting to make a name for himself beyond that and had taken his game to new levels within the last year after deciding to focus on basketball.

"He's a big 6-foot-6 kid who can do everything," Pillsbury said. "He can shoot it, put it on the floor, he plays above the rim and his motor doesn't stop, he just goes after everything. He gets loose rebounds and he's able to push people around a little bit because of his size. I think he's got a bright future at Maine."