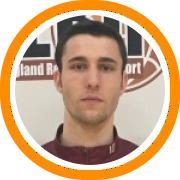 There is an unprecedented amount of talent still left on the board in New England’s class of 2018 given this late date. Typically at this time of year, programs end up settling for the best available and one spring’s commitments become next spring’s transfers.

While the supply may not match the demand at the high major level, there is ample talent left for all other levels of college basketball to choose from. Over the course of the next several days, we’ll break it all down by position, in hopes of helping to promote some of the players who have lots to offer programs at the next level.

The forward positions have evolved quite a bit over the years and can mean very different things depending on the coaching style and system. The biggest demand in today’s game is often for what college coaches refer to as “face-up fours” or “stretch fours.” These are players that have the size to defend and rebound inside if need be but also the offensive skill set to space the floor. Who are New England’s best available candidates?

Max Zegarowski, Tilton – His shot-making resume is a long tail with numerous chapters at this point as he’s exploded beyond the arc from Las Vegas to Providence over the last nine months. He’s not just a knockdown shooter who can make shots in bunches when he gets hot though, he’s also a largely mistake free player who shares the ball, is a better defender than he often gets credit for, and a proven winner.

Toni Rocak, Phillips Exeter – A skilled four/five, Rocak saw the majority of his time in the middle of Exeter’s line-up this year, albeit still while playing facing the basket from the perimeter. His touch extends to the arc but he’s also very adept at putting the ball on the floor and driving opposing big men who lack mobility away from the basket.

Adria Amabilino Perez, Hotchkiss – Another first year international import, Amabilino-Perez missed most of the fall with a groin injury after coming over from England. He hit his stride during the course of the season though as he showed his high basketball I.Q. and versatile skill set. He’s also planning to run with NE6 in the UAA this spring.

Josh McGettigan, Williston Northampton – A Connecticut native and Pomperaug High School graduate, McGettigan’s post-graduate year helped his body start to catch up with his game. He’s a good shooter with an especially dangerous pull-up game who might also move his feet well enough to slide over and be a big wing in certain line-ups at the next level.

Daishaun Woods, Tilton – He fits the profile of what college coaches are looking for these days as he’s mobile with soft touch to the arc and a wiry body type that should really blossom in a college weight room. His potential was clear from day one this fall but he became more and more productive as the year went on.

A couple of other frontcourt prototypes that are in high demand these days include “hybrid fours” who base their game more around length and athleticism than they do perimeter skill. Then there’s what coaches often refer to as “combo-forwards” meaning a player who is capable of seeing time at the three or the four, depending on certain match-ups and line-ups, and hangs their hat on versatility.

Christian Hinckson, Tilton – His physical profile is off the charts with tremendous length, a strong body, and enough size to allow him to defend a variety of different positions. He can straight line drive on the perimeter and get out in transition but became much more effective this year when he bought into playing inside of 15 feet more frequently.

Gabe McGlothan, Putnam Science Academy – The one time Army commit might be the closest thing there is to a modern day power forward as he’s built with tremendous power and muscle mass. He’s also a good athlete though with some developing game facing the basket and so there’s plenty of versatility to compliment his physical gifts.

Alec Spence, Vermont Academy – Spence, who was originally committed to Rice in the class of 2017, was one of Vermont’s standouts during the fall open gym season. He took on more of a complimentary role once the season began but that might be more circumstantial than anything. He plays hard, has a motor, and thrives from 15 feet and in.

Brian Amabilino Perez, Avon Old Farms – Adria’s twin brother suited up for AA rival Avon Old Farms this year. Brian is more of a natural wing than his brother, but has enough size to offer positional versatility at the next level as a skilled combo-forward who both shoots the ball with good range and also has a knack for making short shots in and around the paint.

Kevin Buckley, Cheshire Academy – Buckley is another player who is perhaps naturally a wing but has enough size and strength to play as a small-ball four in most modern line-ups. His best attribute is his athleticism as he plays up at the top of the box and is a true physical specimen. That makes him especially dangerous in transition with similar potential on the defensive end.

Mekhi Warren, Hillhouse – He’s the prototype for the hybrid four as he’s extremely long and very athletic, with quick bounce that allows him to finish and rebound over bigger bodies inside. The progression of his face-up game shouldn’t be ignored either as he’s made notable strides with his shooting stroke this season.