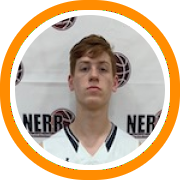 The Crown Basketball Club may be officially based in Long Island but there is a strong New England connection.

In fact, five of the team’s nine players will compete in local prep schools during the upcoming academic year.

The most notable of those prospects is Sean Durugordon, who helped lead Canterbury to a NEPSAC championship this past season and will now spend his post-grad year at Putnam Science Academy. Durugordon is in the midst of a pretty incredible evolution as he’s gone from an undersized big man to a budding big wing within the last year. His recruitment has taken off accordingly as he now claims offers from Auburn, Missouri, Arizona State, Seton Hall, Georgia, VCU, South Florida, DePaul, and Penn State among others.

To his credit, he stayed loyal to the same grassroots program that he had so much success with in the past and is now the face of the program.

While Durugordon may be leaving Canterbury a year earlier than expected, they’re reloading with a pair of other Crown products in Nick Spinoso and TJ Long, incoming post-grads who are both D1 prospects. Like Durugordon, Spinoso and Long are both returners from last year’s Crown team that won five different championships. Also like Durugordon, they’ve both improved exponentially in the year since.

Spinoso recently completed a decorated high school career at Kellenburg Memorial High School in Uniondale, finishing as the second all-time leading scorer in program history and earning all-state honors in New York as a senior. The 6-foot-9 southpaw is still just 17 years old and has added another inch and notable muscle mass to his frame since last summer. He’s skilled, strong, smart, and already holds a pair of early division I offers to his name.

Long is arguably the most decorated player on the roster, relative to high school basketball honors and accolades, and yet still perhaps the most under-recruited. He was first-team All-HGSL last summer, first-team All-Long Island this winter and was also one of the leading scorers on Long Island. He had a pair of early D1 offers last summer, but isn’t being actively pursued by any scholarship programs at the moment….that will inevitably change sooner rather than later though. Long has been the team’s most consistently productive player again this summer. He’s known as a shooter, and rightfully so, but his total impact far exceeds that with an intelligent and balanced floor game. If that weren’t enough, he’s put on 25+ pounds of muscle in the last year as he’s lived in the weight room.

Coming next week...full @CrownBBALL #BeSeen profile including incoming @cburyboysbball post-grad TJ Long, a southpaw shooter who has added 25 lbs of muscle in the last year.pic.twitter.com/krnfy3V0sD

Speaking of living in the weight room, the same can be said of Hotchkiss’ Aidan Rodgers and Westminster’s Teddy Mangiarotti, a pair of guards who are in their first season with Crown after wrapping up debut seasons in the NEPSAC, and are both also highly accomplished students.

Rodgers physique has made tremendous strides in the last twelve months as he now boasts a college ready body to match his high-motor. This guy is an energizer battery on both ends of the floor who just keeps applying pressure. He’s also improved his shot-making abilities and become more reliable from behind the three-point line.

Mangiarotti put up huge numbers this past season at Westy – 23 points, 4 rebounds, 3 asists, and 2 steals – after doing similar damage the year prior at Locust Valley High School. He’s not only physically strong but also highly skilled. He’s a true combo who is equally reliable playing on and off the ball but can also get hot with his jumper at virtually any point.

If you’re looking for this year’s sleeper, look no further than Ahmad Crowell, a 6-foot-5 rising senior wing from Manhasset High School. The long and athletic wing has already had one of the most viral plays of the summer (see below), but he’s also loaded with untapped potential on both ends of the floor as he continues to tap into all of his natural tools and talent.

Who is this year's @CrownBBALL sleeper?

Learn more about this guy on Monday! #BeSeenpic.twitter.com/r9TrB9XhJu

Another player with untapped physical potential is Jaden Kealey, a versatile 6-foot-5 forward with a strong body type and quick feet. He’s a bit of a utility forward right now who plugs a variety of holes but has all the tools to keep developing his versatility and overall impact in the months and years to come.

St. Anthony’s Luke Rossi missed the workout we watched with injury but has the reputation of being a valuable shot-maker on the perimeter.

Brent Bland, from Half Hollow Hills West High School, is a mismatch problem on the perimeter who is smooth and skilled with the ability to make shots and plays alike, but can also over-power smaller guards.

Collectively, this is another group of highly talented individuals who should see recruitment from all levels of college basketball. The most impressive part of Chris Diasparra’s program though is the culture. Lots of people, coaches in particular, talk about culture, but few actually have it. Crown undeniably does and it manifests itself by the way in which they share the ball (year after year), play hard, and have complete buy-in from their alums, who come back to practice against the current team for every practice.

Individual talent plus culture helped this team go 38-2 a year ago and win five different Hoop Group Jam Fest championships. This year we may not have a normal season, but this is a group that is nonetheless continuing to establish itself as a premier program in the northeast in every way imaginable.