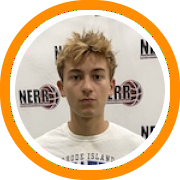 The Be Seen Tour brought us back to the state of Rhode Island last week to check out BCRI, an emerging program in the state whose u17 team features prospects for D1, D2, and D3 college coaches this year.

Collectively, the group is exactly what we had in mind when we designed the tour.

While everyone is lacking normal exposure opportunities this year, college coaches are understandably focused on the programs and prospects they already know. Meaning, while it’s hard for everyone right now, it’s hardest for the ones who were poised to make a name for themselves for the first time.

BCRI and prospects like Parker Mason, Jawarie Hamelin, and Jake Bender all fall under that category.

Mason is a skilled 6-foot-8 forward who can stretch the floor and is adding weapons inside the lane as well. He doesn’t have any scholarship offers to his name yet, which seems criminal at first glance, but understandable given the fact that he didn’t yet have a big following prior to the season and no one has been able to see him since.

Bender was on a similar path, although his decision to reclassify to the class of 2022 will ultimately give him the year back. He already has D1 interest and is going to be an increasingly popular name over the course of the next two years as he combines great perimeter size and strength with three-point shooting and the athleticism to finish hard above the rim.

Hamelin is weighing similar considerations as he’s just beginning to emerge and already making a name for himself locally, while his reputation with college coaches is bound to follow suit. He’s a playmaker, smooth and slippery with his dribble, who is quickly showing that he’s capable of holding his own against other scholarship level prospects this summer.

While those three prospects are getting the brunt of the scholarship interest, the heart and soul of the team is likely Mike Levesque, a point guard from Marianapolis Prep. He’s gritty, tough, and competitive with obvious leadership skills. Beyond the intangibles, he has plenty of game as well. He shoots it well from three, is good with the ball, and had good lift into his pull-up as well.

Jack McMullen is one of the most decorated athletes in the RIIL as he’s a not only one of the state’s top scorers on the hardwood but stars on the football field and even the golf course for East Greenwich High School.

He’s joined on the perimeter by Cranston West’s Joey Ragosta and Pilgram’s Peter Kay. Ragosta has good size on the perimeter at 6-foot-3, makes open shots, and just knows how to play the game the right way. Key is cut from a similar cloth, but he’s a true point guard who knows how to run the show, get the team into their offense, and distribute the ball.

On the wing, St. George’s Ethan Augusto appears to have used the quarantine months to add some notable muscle mass to his frame. He’s now as strong as he is heady and able to operate with both efficiency and versatility on both ends of the floor as a result. Sean Cullen is another jack-of-all trades wing, loaded with intangibles, who was previously ranked among the top ten rising seniors in the state before deciding to head to Marianapolis next year, where he’ll join the class of 2022.

Another player headed to the prep ranks is Levi King, who will do a post-grad year at Woodstock Academy after a storied career at Chariho. King has good size at 6-foot-6, a strong build, and solid athleticism that allowed him to put up 23 points per game this year as a senior in the RIIL.

One of the more intriguing long-term prospects in the gym is Roshawn Fleming, who came to Rhode Island from the Bronx and now plays for Rogers High School. Fleming has all the requisite physical tools with length, athleticism, and a good frame. He can rise-up at the rim but also showed he could handle the ball and make shots. As he continues to learn the game and pick his spots, he could emerge as a sleeper.

Overall, this is clearly a program on the rise, and a gym that college coaches from all three levels would love to be able to be in right now!