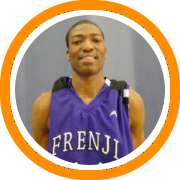 With action at the seventh annual Hoop Mountain All-Academic Camp coming to a close on the campus of Brandeis University on Friday, prospects continued to compete hard hoping to gain the attention of some of the country’s premiere academic institutions still packing the sidelines.  With so many terrific players headlining play at camp over the past couple of days, New England Recruiting Report wanted to highlight a select 12 who separated themselves with their stellar performances, as well as draw attention to a unique match-up that took place between two special frontline prospects.

Match-up of the Day- Battle of the Seven-Footers

During the mid-morning game set, a battle of giants took place when seven-foot-one, class of 2012 center Edo Lawerence from England collided with seven-foot-one, 2014 big Pascal Chukwu out of Trinity Catholic (CT).   Lawerence struck first with a monster two-handed dunk in the first half, before Chukwu countered with a series of tip-ins and above-the-square blocks that showcased his potential as a Dwight Howard-esque defensive presence. Lawrence and Chukwu continued to trade barbs on the low-block, giving coaches and spectators a glimpse of the enormous upside of both prospects with their massive length and spectacular finishing ability.  The match-up between the two post giants not only showcased the budding future of two unique prospects, but personified the type of elite competition that has been taking place all camp long at this year’s Hoop Mountain All-Academic.

Paschal Chukwu - A physical freak of nature at seven-foot-one with a 90-inch wingspan, Chukwu was the buzz of the camp over the course of the last two days with his supreme size and length patrolling the paint, rebounding and blocking shots in high volume while converting multiple lobs towards the top corner of the square.  With still very limited game experience against quality competition, he’s still just scratching the surface of his boundless upside as a game-changing force on both ends of the floor who has the chance to make an impact at the very highest levels of college basketball and beyond.

Ed Lawrence - The other seven-foot plus prospect to emerge throughout All-Academic as a dominate force on the interior with a blend of size and skill that could reach elite levels of college basketball, Lawrence has soft hands, is tougher through congestion than his lean frame implies, and shows no hesitation in elevating high in tight space to hammer the ball home from out past the first-marker.  While his game is far from complete in the form of added muscle and skill development, his upside is simply unquestioned.

Jordan Hill - A standout at the Hoop Mountain Elite Student-Athlete Camp at the University of California San Diego two weekends ago, Hill brought his loaded game from one coast to the other to the campus of Brandeis, breaking people down off the dribble with an endless series of creative crossover switches, scoring with flare above the rim in transition, and showing glimpses of a pure three-point stroke that would make him nearly un-guardable as an ultra-smooth athlete with an ultra-high skill-level.

Kendrick Morris - Personifying an elite-level academic prospect in the class of 2014, the Texas-product is headed to play for head coach Jay Tilton next year at Phillips Exeter and will bring a coveted interior dimension to a squad poised to be loaded with perimeter talent.  He runs, seals, and finishes with super efficiency and rebounds and blocks shots at a rate that will only increase with some added muscle to his long, lean frame.

Tarik Smith - One of many in the crowded stable of talented lead guards that lit up camp with their burst and creativity off the bounce, Smith impressed with not only his ability to get into lane with ease, but elevate, go chest-to-chest with size, and finish through contact from a variety of angles.  Dynamite in the pick & roll, the Bronx-native turns the corner and turns heads with his vocal leadership and court presence that noticeably raises the level of his teammates’ play.

Anthony Barry - One of the premiere defenders at camp, Barry wreaked havoc on opposing ball-handlers unable to deal with his length and quickness as a big-time athlete on the wing.  As a developing offense player, the six-foot-four small forward shows signs of a tightened handle that he uses to maneuver his way through traffic and create a take-off point to show off his high-major bounce attacking the rim.

Cam Shorey - An absolute load to deal with on the interior as a true elite football prospect playing the game of basketball, Shorey impressed up until the last buzzer on Friday with not only his toughness and physicality finishing and disrupting plays around the rim, but the fluidity of his motion and his I.Q. in creating and executing high-level plays in the pick & roll and high-low post settings.  While the future is bright for the Exeter-product on both the hardwood and gridiron, one thing is for sure, whichever sport he chooses to play at the next level, his opponents know they’re in for a dogfight come game night.

Ryne Williams - The little guard from the big state of Texas showed off his plus-sized game all camp long, scoring in bunches from areas all over the floor with a solid stroke from three, an even better mid-range pull-up, and the fearless mentality to knife his way to the hoop for tough scores through contact.  A lightning rod in the open floor, there were few guards at the event who could match Williams’ arc-to-arc burst in transition, where he would impress with the ability to stop on a dime and make the correct play scoring or distributing the ball.

Nick Lund - A big, bruising body in the paint, Lund isn’t going to wow you with his offensive prowess like the other members of this list, but he will enforce his six-foot-eight, 240-pound frame on the glass rebounding and blocking shots in high volume and setting the tone for his team’s defensive identity.  Lund has proven he can score the ball when needed by carving out space and finishing through contact, but his upside as a double-double machine at the next level is boundless as he continues to add skills to complement his punishing physical frame.

Marcus Allen - The kid from the strip in Vegas dazzled all weekend with his sensational lateral quickness, changing speeds and changing pace with ease to get to the rim or get space for his pure mid-range pull-up.  More than just a scorer, Allen has terrific feel he shows glimpses of with sparkling passes that light up his game in-between what he does best, light up the scoreboard.

Sho Dasilvia - A blue-chip athlete who punctuated his stellar camp performance with a three-dunk quarter in Friday’s first game set, the Moorestown, New Jersey-product flourishes in the open floor with the ability to convert turnovers into offense in a hurry with dynamic end-to-end and the flare to change hands in mid-air and finish at or above the rim.

Eric Green - Joining the likes of Barry and Dasilvia in the esteemed circle of ultra-bouncy leapers who assaulted the rim over the course of the event with thunderous dunks, Green got the crowd to its feet with his electric athleticism on more than one occasion during All-Academic.  Heading into his return to St. Mark’s in the fall, look for the six-foot-four high-wire act to continue to add to his offensive skill-set and develop into a real match-up nightmare for opponents unable to deal with his skill and springs.