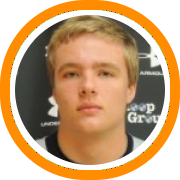 The six-foot-nine center is in the midst of a highly successful senior season at Greenwich.  Following Monday night’s dramatic overtime victory over Trinity Catholic, the Cardinals are currently 17-2 on the season and 15-2 in the FCIAC.

Wolf announced his commitment to Dartmouth following the game according to the Stamford Advocate.

Wolf has been a well known prospect in the northeast region for several years now, dating back to his days at Blair Academy in New Jersey, where he first appeared on the recruiting radar prior to transferring to Greenwich.

He spent the majority of his AAU career starring for the New York City based New Heights program, where his size and high motor were first noticed.

Wolf, who joins Tabor Academy swingman Miles Wright in pledging to the Big Green, came into his senior season noticeably leaner and better conditioned than he was throughout the spring and the summer and has consequently been able to assert himself as one of the top post players in the CIAC this year.

Below are some of his senior season highlights: