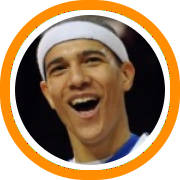 Williston Northampton forward Chris Hudson committed to Bentley University on Saturday, less than 48 hours after the Falcons offered him a full scholarship.

The scholarship is a well-deserved culmination for a career spent doing all the "little things" that go into winning without much regard for individual statistics or personal glory.

Hudson's high school career began at Hodgdon High School in Maine where he helped the team to a Class D state championship in 2014. In the two years since, he has been an important part of the rotation for a Williston Northampton team that has won back-to-back NEPSAC Class A championships.

In other words he might be the only player in New England to win his final game of the season in three straight years.

When Hudson first arrived in the prep ranks, he wasn't perceived to be a scholarship level talent, but he gradually changed that perception first by building up his body, then by extending his shooting range and finally by proving himself a phenominal teammate.

Now, the final product is a 6-foot-6 southpaw forward who plays bigger than he is in the paint, provides court spacing by being a knockdown spot-up shooter from behind the three-point line and is loaded with intangibles.

He joins teammate Sam Geschickter to become the second member of this year's Williston Northampton team to commit to Bentley and the 8th overall to finalize their plans for college basketball.