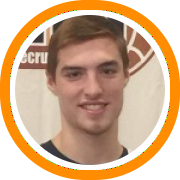 LIU Post is a Division II school with a proud basketball tradition that competes in the East Coast Conference.

After beginning his high school career at Lynn Classical, Doucette transferred into the prep ranks for the 2014-2015 season and has helped Williston Northampton to a pair of NEPSAC Class A championships in that time.

The 6-foot-8 big man has also experienced plenty of individual success in that time as well, making notable strides in both his game and his body to become a scholarship level prospect.

"I couldn't be more excited for Kyle," Williston Northampton head coach Mike Shelton said. "He has one of the best work ethics I have been around at any level. His growth and development over the last two years has been great and he has just scratched the surface. Coach Smiles is getting a fantastic young man who he will love coaching and going to battle with everyday for four years."

Doucette is a consistent low post scorer with his back to the basket, already well versed in how to play pick and roll and also a dilligent post defender and interior rebounder.

He joins Sam Geschickter, who committed to Bently earlier in the year, to become the second member of Williston Northampton School's 2016 class to earn a scholarship from a division II school. They join Matt Folger (Middlebury), Jake Wisniewski (WPI) and Josh Wolf (Lehigh preferred walk-on).

Below are some of Doucette's highlights from his senior season.