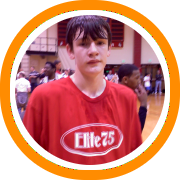 There was a ton of talent in the gymnasium at New England Junior Elite 75 Showcase III in 2011. Check out some 8th Graders who left the gym with a buzz on that day.

Aggressive finisher, crafty inside and uses both hands well. Very smart player, always in the right place to pick up loose ends on the offensive glass.

Chris Baldwin - Currently a 6’7” senior forward at Notre Dame Prep who is part of an exciting C/O 2016 Recruiting Class for the Umass Minuteman.

An imposing physical presence at six-foot-seven with supreme length and quick bounce around the rim, Baldwin scores and rebounds through contact, rotates from the weak block to pin shots high off the glass, and can stretch the defense with a developing stroke out to the three-point stripe.  In one sequence on Friday in which he showcased his huge upside as a game-changing presence on both ends, he jumped over the top shoulder of his man to steal a high-post entry, sprinted the wing after a quick outlet, and finished the break with an emphatic finish above the rim off one hard bounce inside the arc.

A.J. Brodeur (pictured above) - Senior forward at Northfield Mount Hermon is headed to Penn next year to play in the Ivy League.

Great size. Young big whose skill set is visibly developing, showed a willingness to work hard and run the floor, as well as a variety of nice back-to-the-basket moves on the interior.

Ikenna Ndugba - Boston-native and Brooks School senior point guard is headed to Bryant University next year to play in the Northeast Conference.

As dynamic an attacking lead guard as there was at the event, Ndugba was impossible to keep out of the lane on Friday, as he consistently broke people down off the bounce with a series of creative crossover exchanges to finish at the rim in traffic or find an open teammate for an easy score.  Always looking to push the pace in transition, he is as poised as he is explosive with the ball in hand, and, while he can often make the spectacular play look easy, Ndugba impresses with a willingness to make the simple, sure play in favor of a more difficult alternative.

Elijah Pemberton - Senior guard at Chesire Academy is headed to Hofstra next year to play in the CAA.

Possessing terrific length and quickness to go with a polished offensive skill-set, Pemberton scored the ball in a variety of ways on Friday, attacking the rim from the wing with a series of explosive, left-to-right crossover combinations, knocking down open jumpers out to 18 feet, and scoring the ball with ease in transition off turnovers.  A versatile player capable of guarding multiple positions and scoring the ball from all over the floor, he projects as a dynamic playmaker with the natural physical ability to make the people around him better with terrific feel and creative, sound decision making.

Quick point guard with a tight handle and a great feel for making plays in traffic, proved himself a solid distributor.

A big guy with the ability to take the ball off the glass and start the break thanks to ball-handling and passing skills that are typically seen on guards.

Kyle Bouchard - Class of 2015 guard out of Maine is currently a freshman guard at Bentley University.

One of the premier 8th graders in the state of Maine, Bouchard possesses a devastating combination of size and skill.  A powerful six-foot-five forward who can overpower his peers inside the paint, Bouchard makes the most of his size and strength by going right into contact and attacking the rim like a dump truck running down hill.  He also shows a soft mid-range touch that suggests he could eventually stretch his game to the perimeter and evolve into a true mismatch problem at the power forward position.

Tommy Mobley – Had a storybook scholastic career at Newton North HS and also thrived on the summer-circuit with BABC. Mobley is now a post-grad at Philips Exeter committed to Amherst College.

Efficient scorer who took and hit good shots from all over the floor, very active on the glass at both ends.

Tyree Weston - The former New Bedford High School star was one of the top performers at the 2010 #JE75.

A superior athlete with an explosive first burst from the wing, Weston combines his elite length and quickness with a smooth offensive skill-set to consistently beat his defender and finish at the rim from a variety of angles.  His creativity off the bounce is enhanced by a nice feel for making plays over and around size in traffic, and, with a pure stroke from three and ability to lead the break in transition, he’s a complete offensive talent capable of putting up big numbers in a hurry.

Juwan Gooding - Former Milton HS guard was one of the top junior elite guards Boston has seen in the 21st Century; not sure on his whereabouts, but got to think the C/O 2015 southpaw has further playing days ahead.

Joining Ndugba as one of the premiere playmaking guards at the event, Gooding is an absolute nightmare to deal with off the dribble, consistently leaving his initial defender with an explosive left-to-right-switch, only to knife his way through contact and bring the ball back to his dominant left hand to finish with ease at the rim.  Having already established a reputation as a big-time scorer capable of putting up huge numbers in a variety of ways against elite competition, he will pull-up on a dime from three in front of a retreating defender and flashes ability as a creative passer capable of threading the ball through traffic to a left-alone teammate after drawing multiple defenders at the second level.

Aaron McLean - Was a freshman wide-receiver at UCONN this past fall and should be a focal point of the Huskies offense in 2016. Was the #9 ranked prospect in Massachusetts coming out of high school at St. Marks.

An athletic big with a long, lean frame and terrific bounce, McLean is a menace on the glass on both ends, rebounding and scoring in high volume with either hand through contact over defenders unable to match his elite athleticism around the rim.  With soft hands and live feet, his mobility and skill-level are a load to deal with on the interior, and, as he continues to add to a steadily-progressing offensive arsenal, McLean projects as a multi-dimensional talent capable of dominating a game on both ends of the floor.

With great length and an explosive first step from the wing, Glenn lived in the lane on Friday, losing his defender with a straight-line burst to attack the paint and elevate for a series of athletic finishes at the rim in front of late-arriving help.  At his best attacking the basket in transition, he is a long, rangy defender who pressures opposing ball-handlers and gets out in passing lanes to create easy run-out opportunities in the open floor, where he is an elite finisher with a propensity for scoring the ball with flare.

One of the more polished offensive players at the event with an equal ability to hit consistently from three and go by in either direction for a balanced, mid-range pull-up, Serretta showcased impressive maturity as a volume scorer who’s much more than just a knock-own perimeter shooter.  He stood out in station work with outstanding footwork coming off an array of down-screen action and translated such polish into five-on-five play with a variety of buckets that not only showcased his ability to read and react to defenses from one possession to the next, but his natural mold to be as efficient as he is productive.

Athletic finisher who scores consistently through contact with either hand, rebounds in traffic and runs hard rim to rim to space the break.