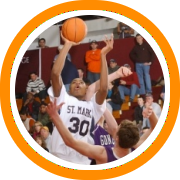 The annual NCAA coaching carousel is in full swing and as usual plenty of local recruits are being impacted as a result.

St. Mark’s forward Melsahn Basabe is the latest player to suddenly be put into an unexpected situation.

Basabe committed to Siena this fall, turning down scholarship offers from numerous schools including some in the Big East, to play for head coach Fran McCaffery.

But on Sunday morning McCaffery left Siena to become the next head coach at the University of Iowa.

Basabe was coaching a ten-and-under AAU game on Sunday when his phone wouldn’t stop ringing.  He said it wasn’t until St. Mark’s head coach Dave Lubick sent him a text message that he realized what was going on.

And as of Sunday night, Basabe was still trying to digest the whole situation.

“Honestly I didn’t have any inside information.  I found out this morning so this is pretty new to me,” he said.  “I didn’t know this was coming so I’m just trying to pick it up and bring it into reality.”

While Basabe emphasized that he was still officially committed to Siena, should he decide to pursue a release from his National Letter of Intent he isn't expecting a problem according to Lubick.

"The connection between Melsahn and Coach McCaffery was the main reason why he chose Siena," Lubick said, "and we solicited an agreement up front with the [Siena] A.D. that Melsahn would be released should Coach McCaffery leave.  The only thing they asked is that we wait to see who the new head coach is and allow them to make their pitch, and we are definitely going to do that."

Other New England prep products who have been impacted by the coaching carousel include Danny Lawhorn, who committed to Fordham head coach Jared Grasso only to see him replaced by former Hofstra head coach Tom Pecora, and Winchendon forward Marvin Dominique, who had previously committed to Pecora at Hofstra.

New Britain forward Darius Watson is in the same boat after New Haven head coach Al Siebert was let go following the conclusion of the Charger’s season and a replacement not yet named.