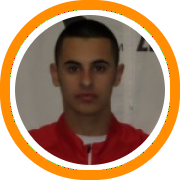 Calnan was a four year varsity player at Wakefield who averaged 15 points, 8 rebounds and 4 assists per season as a senior and helped lead the squad back to the MIAA state tournament. He was also a two-time Middlesex League All-Star.

A longtime member of the Mass Elite AAU program, Calnan joined the club as a 7th grader and competed with their top college exposure team last spring, earning interest from a variety of division III programs in the process.

"Chris scores, distributes and rebounds. He fills up the stat sheet and contributes in a lot more ways than just scoring points" Mass Elite head coach and program director Eric Polli said. "The best word to describe Chris’ game is smooth. It doesn’t have any rough edges."

Beyond his abilities on the floor, Polli said Plymouth State is also getting an extremely high character young man and good teammate.

"It might sound corny but Chris is the kind of kid that you would want to marry your daughter,” he said.  “He is hands down one of the classiest people that you will ever meet. He is a young man of exceptional character. I think every coach in their lifetime should have the opportunity to coach someone like Chris.”