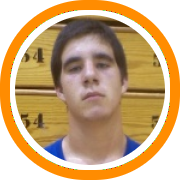 Palmer averaged 16 points and 10 rebounds during his senior year en route to being named the Vermont Basketball Coaches Association Player of the Year.

He was also a McDonald’s All-American nominee, the Bennington Banner Team Player of the Year, a Marble Valley League all-star, and second-team All-State by the Burlington Free Press.

His courtship with Dominican was a bit of an 11th hour romance after waiting out the recruiting process in hopes of landing a scholarship.

“They contacted my AAU coach about a month ago and I made the visit,” Palmer told the New England Recruiting Report.  “I played for them and they liked what they saw.”

Dominican went on to offer the big man a full athletic scholarship and he quickly accepted.