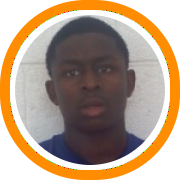 Vermont Academy post-graduate Keron Deshields made a verbal commitment to the University of Montana on Friday just a few days after returning from his official visit.

Deshields was a key ingredient for a Vermont Academy team that underwent one of the biggest turnarounds in the NEPSAC this year under first year head coach Jesse Bopp, finishing with a 17-14 record and qualifying for the AA tournament.

Known as much for his leadership abilities as he is his basketball skills, Deshields ran the show for Vermont Academy this year and earned second team All New England honors in the process.

“Keron Deshields is a winner,” Bopp said.  “He is one of the most competitive kids that I’ve ever been around.”

The West Baltimore native, who previously starred at Towson Catholic and St. Vincent Pallotti High School in Maryland, arrived at Vermont Academy without any division I scholarship offers.

He saw a steady dose of division I interest during the course of the season and ultimately ended up visiting both Montana and Longwood before ultimately committing to Grizzlies head coach Wayne Tinkle.

“He has earned a division I scholarship through his work ethic and toughness,” Bopp said.  “He realized his dream and for that I am happy for him and his family who have supported him.”