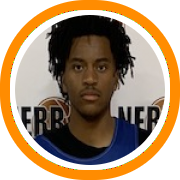 South Kent post-graduate guard Wrenn Robinson came to New England from Oakland, California and put up big numbers in his only season in the prep ranks, earning All-New England honors in Class AA of the NEPSAC as a result.

The accolades were nothing new as Robinson previously starred at St. Ignatius College Prep in San Francisco where he was a three-year starter and earned First-Team All-WCAL honors as a senior. He also competed in the Adidas Gauntlet u17 division after spending his u15 and u16 years in the Nike EYBL where he went up and scored against the likes of James Wiseman, Ashton Hagans, and LaMelo Ball.

With recruiting interest from numerous levels of college basketball, and a full scholarship offer on the table, Robinson is already a full division I qualifier and top-notch student who has been academically accepted by colleges and universities including Wesleyan, Clark, Oregon, San Francisco, USC, Loyola Chicago, and San Diego State.

Robinson is a lead guard with good positional size, a strong body, and the ability to score in bunches. He's a true three-range scoring threat who has a tight and creative handle to make plays for himself and others with the deep shooting range to match. One of his most unique skills though is the ability to make tough shots off the dribble, which is increasingly valuable in today's college game given the prevalance of pick-and-roll basketball.

"I have had the opportunity to coach over 25 division I players in my short time in the coaching business, and Wrenn is just as good as any one of those players...Spending the last year evaluating Wrenn's talents and abilities he brings a lot of positive attributes to every team he is apart of. His greatest skill is his ability to make tough shots consistently. He does a great job creating shots off the dribble and is a big time shooter from 3pt range. Wrenn continues to show off his ability to playmake as well as to create opportunities for others. He does a good job in high pressure situations, finding opportunities when his team is against the shot clock and when they need a bucket in tight games. Over the last year he has worked hard to show that he is a tough on ball defender and always rises to the occasion to make the plays necessary to win. I believe with his size and strength at the Point Guard spot he is physically ready to compete at the college level from day 1. Any program that gets the services of Wrenn is not only getting a talented player but a solid citizen off the court."