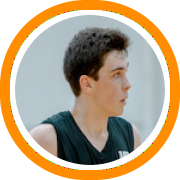 Ryan Power is one of those players that may not be quite as well-known as he should be.

He's had a decorated career at Waltham High School, rewriting the record books in recent months and essentially breaking every scoring mark the program has.

While he's been a consistent staple of Waltham's teams over the years, his game has made great strides, especially within the last year as he's added new skills and weapons, expanded and diversified his game, and blossomed into someone who impacted the game in virtually every way possible this winter.

Other Awards and Accolades

"Ryan Power is a kid any coach would want the opportunity to have in their program. Ryan has the ability to score on all three levels! He's truly working on his body to be at the rim, consistently make threes, and I've never seen a kid with an 'old-school' mid range ability like Ryan. Additionally, an underrated part of his game is his ability to pass the basketball and Ryan is easily the all-timer leader in taking offensive charges during his four year stint on the Waltham High School Varsity.
The off court kid is equally as impressive with a 1400 SAT and a 4.95 GPA he commits just as much to the classroom. He's humble and never self indulges, to the point where his 1302 career points could've easily been 1500 if he were concerned with himself over the team. I think any one of his teammates would tell you, at times, they had to tell him to shoot it more!
In his senior season, all the accolades came his way and whoever commits to Ryan and vice-versa, they'll never regret that choice, in fact, they'll be getting a kid that flew under the radar largely due to his on humility!"
- Mike Wilder, Head Coach, Waltham High School

College Coaches: Recruit Ryan Power. Been involved in high school coaching for almost 30 years & sometimes just have to scratch my head. This is one of them. Watched film of him all year & saw him play in Manheim, PA last year on two occasions. Ryan is the real deal. Don't wait!

If you are a college coach and haven’t seen Ryan play-missing out big time! https://t.co/EYiIpm3IfB

Power is an athletic and instinctive wing who scores in a variety of ways. He's a great downhill driver who attacks close-outs very well, gets momentum at his back in the open floor, and can finish up above the rim. He's starting to evolve into a true guard, where his size becomes especially valuable at 6-foot-3. He's a strong playmaker in pick-and-roll who can turn the corner, make mid-range shots off the dribble, and finds his bigs around the rim. He's also made consistent strides in his three-point shooting, converting over 40% of his attempts during the high school season. Defensively, he has great instincts, quick hands, and an increasingly strong body.