Tyler Desrosiers:  More than a Shooter 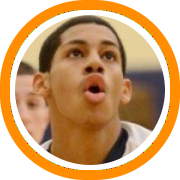 Last season, the 6-foot-1-inch, 195-pound guard from Agawam High averaged 26.9 points per game, including a season-opening 42 points versus Springfield Central – the 2012 Division 1 state champs – and 43 points against New Leadership (Springfield).

But it is his all-around abilities – especially as he showcased against perennial state power Springfield Central – which highlight an extensive package of abilities and intriguing long-term potential.

Agawam, which lost by 46 points to Central a season earlier, remained competitive last December almost entirely because of Desrosiers. Though the Brownies eventually fell, 82-67, they cut an 18-point deficit to three points with two minutes remaining as Desrosiers scored, picked up a few steals and repeatedly found his teammates with deft passes.

“When I saw his stats,” Agawam coach Dave Federico said, “the most amazing thing was his field goal percentage was 63 percent and he only had one turnover. That kind of sums (him) up (as a) player.

“The (Central) coach, Mike Labrie, who is historically one of the best coaches in Western Massachusetts, said it was by far the best performance he’d ever seen. There was a little buzz about that for the next couple of weeks, obviously, because it was against Central at their place; but also because . . . people knew (Tyler) as a good player but didn’t really think of him as a great player. (It) kind of elevated him to one of the top players to watch.”

For Desrosiers, his success against Central was a direct result of staying aggressive.

“When I was getting to the hoop that’s when things were going right,” he said. “I somehow managed to keep doing that (even though) they kept switching defenders on me . . . trying to switch up what I had to do to get the ball and score.”

By midseason a handful of colleges had expressed interest, including a tape request from the University of Tennessee following the Spalding Hoop Hall Classic. Since then, however, Desrosiers has fielded inquiries from mainly nearby programs.

“I’m really not trying to focus on that,” Desrosiers said recently when asked which colleges have been in contact. “I’m focusing on getting better so I can get higher in the recruiting. There are a couple colleges that have been talking to me, but I haven’t been looking deep into them – a couple higher Division 3 schools.”

Over the past few seasons, Desrosiers game has transformed from solely a pure, spot-up shooter to someone who can create off-the-dribble both for himself and his teammates.

“Tyler’s game has kind of an old-school craftiness,” explained Chris Ferriter, who evaluates prep hoops talent for The College Connection. “He does things like use little head fakes and go the other way. He’s got range on his outside shot, and he seems to understand and know the game pretty well. He’s also able – even though at the higher levels he may lack foot speed – to get to the rim. And he can make difficult shots when he finds himself up against bigger and more athletic players or secondary defenders.”

According to Ferriter, such intangibles aren’t taught at camps or by coaches; they develop through individual hard work and an innate basketball IQ.

These attributes have allowed Desrosiers to flourish wherever he’s positioned.

“He plays one through four,” Federico said. “Depending upon the matchups and whose guarding him and who is on the court for us, I can put him at the one and I can drop him all the way to the four.

“If he has a smaller guy on him, he can take it to the basket, get into the lane and score with ease . . . even post up. And if he has a bigger guy – guys that are three, four or five inches taller, and athletic – he has the ability to create off the dribble from the outside. He’s pretty much a nightmare for opposing teams and coaches because no matter who you put on him it’s ineffective.”

At the next level, Desrosiers projects as a guard. His superior court vision will translate seamlessly, but Desrosiers knows he must improve his handle, especially with his right-hand, increase his lateral quickness and strengthen his physique.

Over the summer – and under the tutelage of his AAU coach and stepdad, Tim Sheehan – Desrosiers is honing his skills with the Mass Hoops Jaguars. A recent scrimmage against 2013 Division 1 state champion Putnam Academy team provided Desrosiers an opportunity to measure himself against athletically superior competition.

While his shot wasn’t falling during the mid-week matchup, he still affected the game by setting up his teammates for easy baskets.

“Everybody likes playing with him,” Sheehan said. “He’s an unselfish player. He scores his points, but I think he’s a better passer. I think his passing ability is underrated . . . he can make any pass. That’s the best part.”

Where Desrosiers ends up after Agawam is still a long way from being determined. There is plenty of time for that scenario to play out for the now 17-year old with a post-grad year being a possibility; something which would give him an extra year to ready himself.

“We’ve had some pretty good players (Rashad Wright, Derek D'Amours and Ryan Labonte) that have been considered some of the best players in Western Mass,” Federico said. “But I’ve never coached a kid that has the total package like he does. He has the ability to play D1 ball.

“I think the biggest thing for him right now is getting into the weight room and improving his body; getting a little bit quicker in terms of his lateral movement; (and) definitely working on his vertical leap. Basketball-wise – his ball handling, his shooting, his ability to penetrate, his ability to play defense – there’s not a doubt in my mind that he can play at the highest level. It’s just in terms of his body . . . if he’s going to make the necessary strides to compete physically with those guys.”

So far, Springfield College has been the most aggressive. They watched him play a couple games last season and also offer a major (sports management) which appeals to Desrosiers.

But with a summer of AAU to strengthen himself and his game – coupled with a success-laden senior season at Agawam – the list of Division 3 suitors, or perhaps even beyond, will undoubtedly swell in the near future.

“I’d like to see him more and more,” Ferriter said. “And I think schools should definitely be watching him and taking a look at him.”

Below are a few Beavers players that impressed in their scrimmage against the Mass Hoops Jaguars:

Dizel Wright (2014) – Wright was the Beavers most consistent perimeter shooter.  At 6-foot-1-inch, the guard knew exactly where to position himself for open shots off the catch and demonstrated a quick release and soft touch. His ready position of knees bent and hands up and out for the pass would have pleased any coach. When he wasn’t hitting from the outside, Wright’s speed, agility and vertical were on display as he filled the lanes with ease and converted from everywhere around the rim. Paired with Jonathan Garcia, the backcourt combination wreaked havoc by creating countless turnovers and easy transition buckets.

David Murrell (2014) – Consistent energy and effort were Murrell’s defining traits versus the Jaguars. With few, if any, plays run for him, the 6-foot-3-inch swingman outhustled every other player to loose balls and was also a force on both the offensive and defensive boards. On one sequence, he collected four offensive rebounds. Each time he passed it out to an open teammate until the Beavers finally scored. Murrell’s tenacity and willingness to do the ‘dirty work’ were crucial in the Beavers success. He also showed nice range knocking down a couple corner 15-18 footers.

Jonathan Garcia (2015) – The 6-foot-2-inch guard is a three-point shot and long-range jumper away from being a truly special player. His ability to penetrate and consistently find open teammates repeatedly made those around him better. For his size, Garcia also possesses an impressive wingspan which makes him an imposing defender to get by and also aids him when finishing at the basket. Against the Jaguars, Garcia was the best all-around player. His athleticism and ability to process game situations quickly and accurately allowed him to execute in ways that visibly pleased his coaches.