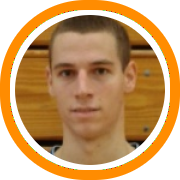 Two local prep products have both made verbal commitments to schools in the Northeast Conference within the last 24 hours.

Donnele Munda has re-committed to Farliegh Dickinson and head coach Greg Vetrone, little more than three months after making an initial verbal commitment to FDU only to re-open his recruitment a day later.

This latest commitment is said to be a secure one, giving FDU a perimeter sniper with arguably the deepest range in all of New England.  Munda’s ability to make shots in bunches will give him an immediate niche in the Northeast Conference next season.

The Canadian native first arrived in New England last year, spending his junior season at Vermont Academy, before transferring to Notre Dame Prep as a senior.

Deschamps is a Brazilian native currently in his second season at Lee Academy.  He’s made consistent strides during his two years in New England.

Lee Academy head coach Deshon Gaither referred to Deschamps as one of his steadiest players on Sunday, noting his work ethic, rebounding presence, and ability to knock down the elbow jumper.

Both Munda and Deschamps were in action during the final game of the National Prep School Invitational on Sunday as Lee held off Notre Dame’s post-graduate team.  Both players were still uncommitted prior to the game.