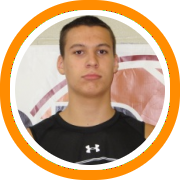 The Mass Rivals trumped everyone in a loaded field this weekend at Hoop Group’s Providence Jam Fest, claiming their second title of the spring after taking the Northeast Hoops Festival two weeks ago. We saw two very exciting Final Four Matchups between CBC (Donnelly) and Mass Rivals, as well as CBC (Smith) and Westchester Hawks on the other side of the bracket. Rivals and Westchester ultimately advanced to the 17U finals, where Rivals took the title and some of New England’s most recognizable names stood out on a big stage.

Meanwhile in 16U bracket, the championship game was far less dramatic as the Rhode Island Hawks defended their home turf and ran away with the title.  Here’s who impressed over the course of Sunday’s action in Providence:

Noah Vonleh, 2014 (Rivals)-The clear-cut best player in the entire event, Noah, like always, displayed his high basketball IQ and level of talent that is seemingly limitless. Noah was a force on the glass all day today, and demoralized opponents by using his long arms to make tip-ins and knock down shots with a release high above his head.

Kahlil Dukes, 2013 (CBC)-Dukes’ 30+ point performance against Westchester in the Gold Division semifinal was one of the most dominant performances of the weekend. His creativity with the ball in his hands is second to none, he makes a great majority of his shots off the dribble, and makes players around him better thanks to his pinpoint no-look passes. Dukes thinks and moves a half-step faster than most everybody he plays against, and is sure to see much more high-major attention after this weekend.

Samuel Dingba, 2013 (Westchester Hawks)-Dingba is a fascinating post player to watch because of how well he understands on-ball and help defense; his head is constantly on a swivel and he truly grasps the concept of beating his man to a spot on D. He has a powerful upper-body, so as he continues to develop his post skills and become more physically coordinated, he will have the ability to make himself a menacing threat down-low in the college game.

Kaleb Joseph, 2014 (Rivals)-If there ever was, there is no longer any doubt that Joseph is a legitimate high major scoring guard. Vin Pastore’s squad was looking to Joseph early on in the championship game vs Westchester, and he fully embraced the opportunity, scoring inside and out leading Rivals on the fast break.

Abdul-Malik Abu, 2014 (Expressions)-Abu is a rare physical specimen who overpowers opponents down low thanks to his strength, uses his quick feet to beat defenses off the dribble, and takes advantage of his long arms by blocking/altering shots and rebounding at a high rate. While Expressions eventually lost to CBC, Abu easily made himself stand out as a high major college player.

Matt Cimino, 2014 (Rivals)-Cimino was at his very best in the Rivals’ championship game with Westchester, as he got hot in the second half and knocked down five total three pointers. The big sharpshooter still needs work on his inside game, but his ability to hit big shots and penetrate defenses makes him a huge threat and very promising prospect.

Henry Bolton, 2014 (Rhode Island Hawks)-Bolton was instrumental in the Hawks’ 16U Gold Bracket championship. He was as versatile a guard offensively as any at the event, showing he can handily run an offense. Bolton still has two more years of development for the Hawks and for Mike Hart at St. Andrew’s, so he will certainly be a player whose development should be followed with a close eye by college coaches and hoops fans.

Dimitri Floras, 2013 (Rivals)-Floras and Joseph were a lethal combination on the perimeter for Rivals in their title run. Floras is a tough lead guard who can finish going to the rim with either hand, knock down long jumpers and make tough passes on a dime, and increase his team’s level of play with his hard-nosed defensive effort.

Chris Braley, 2013 (Middlesex Magic)-Braley is built, he’s aggressive on the glass and on defense, and he can score from anywhere on the floor. He is a dangerous threat as a shooter, but also showed in the Magic’s showdown with Westchester today that he can be a defensive stopper and contribute with his underrated slashing ability.

Kevin Degnan, 2014 (Team Frenji)-Kevin was a relatively unknown going into today, but he impressed all in attendance with his performance against eventual 16U champion Rhode Island Hawks in the Elite 8. He’s a strong 6’6 wing who can literally score from anywhere; he knocked down three-pointers, constantly looked to penetrate the defense, ran the floor like a deer, and finished hard going to the rim.

Jackson Donahue, 2013 (Rhode Island Hawks)-Jackson is a lights-out shooter who has that “in-the-gym” range that college coaches covet and drives opponents mad. He picks his spots, can knock down shots off the catch or the dribble, and is an exceptional playmaker in transition. Donahue’s ball handling is very underrated and as he continues to get stronger and more athletic, he will make himself into multidimensional prospect.

Pete Miller, 2013 (Middlesex Magic)-Miller is a big man with a polished game and is highly developed on the offensive end of the floor. He has a big upper body and has no problem throwing his size around down low against opposing post players. Miller played the type of hard-nosed basketball that Middlesex Magic has come to be known for, and his recruitment is only going to increase as he grows into his body.

Sean Obi, 2013 (CBC)-Obi continues to be an intriguing prospect for college coaches, as he once again brought his tough drop step and aggressive rebounding for his CBC squad on Sunday. Sean is a big, strong forward whose offensive game has developed at a high rate, and he can be counted on to make a name for himself on the AAU circuit this summer.

Chris Regus, 2013 (Westchester Hawks)-He was absolutely on fire in Westchester’s semifinal matchup with CBC, knocking down shot after shot from mid-range to deep three to lead the Hawks to a finals appearance. Regus is great at moving without the ball so that he can get open and make plays. For what he lacks in dominant explosiveness, Chris makes up for with clever cuts and head fakes.

Alec Brennan, 2014 (Expressions)-Brennan is a skilled four-man who is garnering a lot of Division 1 attention, including his first high-major offer from Iowa State last weekend at Pitt Jam Fest. Brennan showed once again today what an improved rebounder he is, and that he can score in a variety of ways and move like a guard, an obviously rare trait for a kid that is 6’8.

Malik James, 2014 (Expressions)-The Brighton High star is starting to garner some scholarship-level attention, and rightfully so as he continues to show that he has the intelligence, athleticism, and skill to run an offense effectively and be productive himself while doing so. James is a fierce on-ball defender, a trait that should not go undervalued in this hard working young player. Though Expressions fell to CBC-Donnelly in the Elite 8, James inserted his name as a breakout player in the 2014 class.

Mustapha Heron, 2016 (CBC)-Yes, an eighth grader was playing with CBC’s 17 team today, and not only that, but he was an impact player in helping them win ballgames. The sky is the limit for this young man, he already has a strong body for a player his age, and though his offensive skills will obviously benefit from years more of development, he clearly is far more advanced as a prospect than nearly any player his age in the Northeast.

Josh Sharma, 2015 (Rivals)-The 6’9 big man has a ton of ability and skill for a player his size, to go along with offers from UMass and Lehigh. After standing out last year at Lexington High, he will go on to play at Northfield Mount Hermon. Sharma is very coordinated, is comfortable throwing his body around, and displays a very high basketball IQ by how well he moves without the ball.

Paschal Chukwu, 2014 (CBC)-Paschal is continuing to emerge as a big-time shot blocker, using his extremely long arms and excellent timing to instill fear into opponents who dare to drive to the rim on him. His offensive game obviously needs developing, but you can’t teach size, especially when combined with an impressive motor and basketball intelligence.