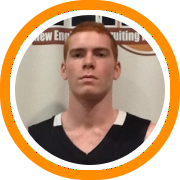 There is a new top five in Vermont’s class of 2012, although the top ranked player remains the same.

Mill River’s Harrison Taggart remains the top overall prospect in the sophomore class.  At six-foot-four Taggart can play four different positions at the high school level but projects as a swingman in college where his length and rapidly developing skill set will prove invaluable.

Not only does Taggart have the physical tools and hard earned basketball skills to be productive, but he is also more battle tested than any other player in the state, taking every opportunity to travel to other areas to play against top competition.

Put it all together and you have not just the best player today, but the best prospect three years from now and so a very easy choice as our number one ranked player.

Behind Taggart comes the second ranked player in the state, Andrew Shuman from Websterville Baptist High School.  This was a close call as Shuman has the size and athleticism to be able to dominate the interior and ultimately have good potential down the road, but he will need to put in the work on the fundamentals in order to capitalize on that.

Jake Maynard is making his first appearance on this list in the third spot.  Fresh off their state championship last year Rice is firmly in rebuilding mode having lost several contributors to graduation and Maynard is one of the young players that has emerged as a staple of the program moving forward.

Rounding out the first five is the inside-out duo from Mount Mansfield Union.  Tom Lacy anchors the backcourt as a scoring presence in the two-guard spot while Eric Suder provides a big man in the middle to patrol the paint.

Twin Valley’s Chad Copeland and Colchester’s Anthony Granai are first up on our honorable mention list.