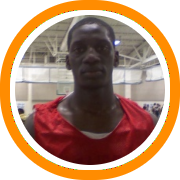 Boyomo’s commitment comes on the heels of a recent visit to Rutgers and legitimate recruitment from places like Colorado and Washington within the last month.

Boyomo visited Rutgers last weekend, just days after Mike Rice was named the Big East school’s new head coach and then took a visit to Conference USA’s Tulane this past Thursday to Saturday.

“He rerouted his flight on the way home to take a trip to D.C. for Saturday and Sunday,” Kent head coach Jason Couloumbe said.

Apparently the last minute decision proved to be an important one as Boyomo was obviously impressed with what he saw and heard during his visit to Howard’s campus.

“[head coach] Kevin [Nickelberry] said ‘we’re going to be able to build the program around you and your leadership’,” Couloumbe said.  “Theo loves D.C., he wanted to be in a cosmopolitan environment, he has friends in the area, and it’s a very good school.”

Boyomo’s commitment is huge for the newly appointed Nickelberry for a number of reasons.

First and foremost, Boyomo has the sheer talent to make an immediate contribution in the MEAC and, with his best basketball definitely still ahead of him, the long term potential to develop into one of the premier big men in the conference.

Secondly, to land a big man of Boyomo’s stature at this time of year (when big men are in such high demand) and against such small odds given the level of other schools that were recruiting him, is a feat that will give Nickelberry instant credibility as he tries to rebuild a Howard program that went just 7-25 last year.

Boyomo arrived at the Kent School three years ago from his home in Cameroon.  In that time he has established himself as one of the premier defensive big men in the region and helped Kent to take their basketball program to new levels, culminating with a Western New England Championship in March.

Boyomo was expected to officially sign with Howard either later in the day Tuesday or Wednesday.