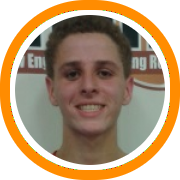 As action continued throughout Saturday and into Sunday morning here were more young players that caught our attention:

Alex Preston – The 6’7” long and lengthy big man really impressed with his physical tools and skillset for a young player his size. He has good feet and soft hands that allow him to catch tough passes or gather rebounds for easy lay-ups around the rim. Maybe Preston’s best skill at this point though is his ability to run the floor. A number of times this weekend he grabbed a defensive rebound, outlet it to a guard, and then sprinted rim-to-rim which often led to easy lay-up for himself or at least offensive rebounding opportunities. Defensively, he led the camp in blocked shots and served as a great last line of defense for his team. Preston will attend Darien High School (CT) as a freshman this fall.

Matt Glassman – He shared the Most Outstanding Camper award with Brandon Hurst, and was well deserving of it. Glassman has an incredibly tight handle for a player his age, is a knockdown shooter, and, most importantly, is an unquestionably hard worker who strived to get better in every drill, station, and game this weekend. No defender could keep Glassman in front because he does a great job of using his great handle to change speed and change direction frequently, and knocks down shots if he is given too much space. He will attend Bedford High School (NH) this fall, and with added strength should be able to make an immediate impact at the high school level.

Freddy Schaake – He was one of the more developed players as far as strength goes, and that allowed him to overpower defenders on a rather regular basis. He also has long arms, and did a great job of making plays around the rim. He is not only Preston’s AAU teammate on USAD, but also will be attending Darien High School next year. Between Preston and Schaake, Darien High has a bright future ahead of it.

Dawson Leonard – The very athletic guard brought a ton of energy to everything he did this weekend. Whether it was games, drill stations, or ball handling workouts, Leonard was a leader due to his great amount of energy. During the games, he played well due to his unrivaled quickness. That combined with his good handle made him a very tough cover for any opposing defender.

Bruce St. Peter – If there was a camp hustle award, St. Peter might have taken it home. The big man who was often the tallest player on the court was often the first guy on the floor for loose balls, took charges, and did a great job of communicating on defense. He also showed some good footwork on the post, and had some great finishes in the paint.

Mason Labonte – The strong, physical big battled down low and did a good job of taking up space in the middle of lane defensively. Offensively, while he still has a developing skillset he was often able to score just by bullying his way to the hoop for easy opportunities around the rim.

Colin Cramer – He was one of the camps leading scorers because he does a great job of getting easy hoops in transition, but also has the capability to knockdown open jump shots. He is one of those guys that can silently get 15 to 20 points in most games because he plays within himself, finishes simple plays, and hits open shots that he should hit.

Malik White – The New Jersey native has great pace to his game, and never seems in a rush. Kept defenders off balance by changing speeds well, and using an unorthodox game to get where he wants on the floor.