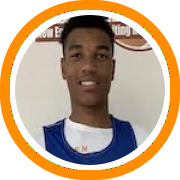 Little more than two weeks after being named the new head coach at St. Michael’s College in Vermont, Eric Eaton has landed his first recruit and it’s a potentially big one as MacDuffie School forward Jalen Gorham has opted to return to his original graduating class of 2019.

Gorham has tremendous raw talent. He’s an elastic athlete with extremely long arms (7-foot wingspan), huge hands, good touch, and a frame that he is just starting to grow into.

In short, he’s the type of guy that hasn’t put it all together yet but if and when he does could end up being a big steal at the division II level.

Prior to arriving at MacDuffie, Gorham previously starred at York Country Day in Pennsylvania where he was a first-team Class 1-A All-State selection as a junior and a third-team All-State as a sophomore.

He came up the ranks with the York Ballers AAU program and returned to star with them again this summer, showing off recent improvements in his game and continue to intrigue division I suitors in the class of 2020. He was also one of the standouts at the Elite 75 College Showcase in June.

Now, Gorham joins Richard Springs, to become the second member of MacDuffie’s 2020 class to reclassify back to 2019 in recent weeks following head coach Jacque Rivera’s decision to take over the program at Woodstock Academy.