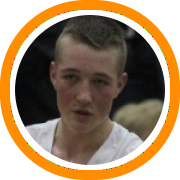 The Shooting Touch Holiday Shootout got underway on Friday at Tufts University, bringing top talent from all over the northeast region to the greater Boston area.  Here’s a look at how things went down:

Tyler Nelson, Central Catholic – The Fairfield bound senior came out on fire, dropping 15 of his team’s 19 first quarter points, while knocking down shots with an incredible degree of difficulty, albeit with a heavily bandaged left wrist.  Nelson would ultimately finish with 24 points, including four three-pointers (some of which were from NBA range), while being both double-teamed and face-guarded throughout the entire second half.

Chris Rodgers, Franklin – The senior guard was sometimes the second biggest player on the floor for Franklin as they occasionally relied on a four-guard set, but he certainly rose to the challenge, finishing with 20 points (including a perfect 8-8 from the free-throw line) along with 13 rebounds as he played far bigger than his listed height around the rim.

Michael Boen, Mansfield – The junior was one of four Mansfield players to finish in double figures with 15 points, while also leading the way on the glass with 14 boards.  His double-double helped to compensate for the absence of Brendan Hill and Kevin Conner, both of whom are currently out of the line-up for Mansfield.

Karl Towns, St. Joseph’s – Local fans got an up close and personal look at Kentucky bound big man Karl Towns on Friday night and he did not disappoint showing the high skill level and basketball acumen that has made him a top ten ranked prospect in the national 2014 class.  A near seven-footer, Towns has a sweet shooting stroke with deep range and a terrific understanding of how to operate the high low game for easy buckets around the rim.

Wade Baldwin, St. Joseph’s – It was ironic to see the future Vanderbilt guard perform just miles away from the campus where current Commodore’s assistant coach Yanni Hufnagel thrived as a Harvard assistant, but Hufnagel would have been proud on Friday night as Baldwin consistently displayed an improved offensive game while maintaining his defensive superiority.