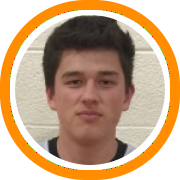 Amherst is annually one of the top ranked liberal arts college in the country and athletically, head coach David Hixon has built them into a true division III powerhouse with national championships in 2006 and 2013.

In Sellew, the Lord Jeffs are getting a strong interior player who can score inside the paint and provide a potential double-double threat.

After beginning last year's AAU season out of the line-up with injury, his return to the court proved to be a major spark for a Warriors squad that punctuated a strong summer with a 6th place finish in the 17-and-under AAU Division I Nationals.

"The allure of Amherst being one of the top ranked schools in the country as well as a program that has won two national championships in the last seven years and 7 NESCAC titles in the last 14 years was very hard for Eric to pass up," Boston Warriors director Mark Papas said.

Sellew has played for the Warriors for the last two summers and turned in strong performances at both the BasketBull Summer Championships as well as the Hoop Group Summer Classic before again thriving in Louisville.

He earned interest from schools in both the Ivy League and Northeast 10 Conference before ultimately deciding on joining Coach Hixon and Amherst.