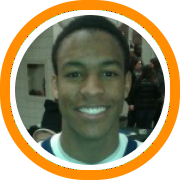 New England’s first snow storm of the season couldn’t stop the opening day of the Scholar Roundball Classic as head coaches from Boston College, Harvard, and Brown joined assistants from UConn, Creighton, and Davidson among others to take in six exciting games of action at Babson College.

Champlain came out ready to go, opening up an early lead and maintaining it for the vast majority of regulation, but the defending Class AA champions made a run late with Kaleb Joseph scoring 8 of his game high 20 points in the final three minutes of regulation.  Joseph knocked down four threes while Jalen Adams chipped in with 15 points. Connor Gilmore finished with 11 points and several rebounds inside while Idris Taqqee led the team defensively while chipping in with 9 points of his own.

Mitchell Keating was the standout from Champlain, showing a pure shooting stroke while raining down six of the team’s 10 three-pointers.  Champlain will return to action on Sunday as they take the court at 12:15 to face Brimmer & May.

Rivers freshman Jermaine Samuels announced his arrival on the scene in dramatic fashion, pouring in 20 points and 11 rebounds in the first half and finishing with a day high 30 points while completing a variety of high level plays and making a series of tough shots.  Azar Swain was also impressive in his freshman debut, finishing with 11 points while showing his long-range shooting stroke.  Unsigned senior Matt Prokop had a big outing of his own, finishing with 20 points while providing a tough interior presence on both ends.

Vermont, who was playing without both Sedee Keita and K.J. Santos, got good offensive production out of their sophomore backcourt of Bruce Brown and Christian Vital, who finished with 29 and 25 points respectively.  Brown made a number of athletic drives to the rim while Vital continued to do his best work from deep.

The game went back and forth for the first 10 minutes of action before NMH broke it open with a 20-2 run, en route to a commanding victory.  Seven different players went on to score 8 points or more with Jackson Donahue leading the way with a team high 15 points along with several heady assists.  Josh Sharma looked aggressive and athletic around the rim for his 12 points while Aaron Falzon knocked down a pair of threes for his 10.  Jerome Desrosiers was another freshman to assert himself today, scoring 10 but more importantly infusing his toughness and energy onto the game.  Daquan Ervin, Sem Kroon, and A.J. Brodeur finished with 9, 8, and 8 respectively.

Vanier was led by the future Valpo backcourt of Tevonn Walker and Max Joseph who finished with 13 and 10 points while Schneiders Suffrard added 11.  Walker stuffed all columns of the stat sheet as he also provided an excellent perimeter rebounder and aggressive playmaker at the point.

Andover used a stifling 1-3-1 defense and a deep collection of three-point shooters to control Saturday’s contest against Milton.  Eric Alperin set the tone with his tenacity and playmaking at the point while Brandon Michel anchored the team on the defensive end of the floor.  Sam Glazer made a number of crafty passes off the dribble while Jacob Howell contributed with his ability to stretch the floor from beyond the three-point line.

Alec Brennan led Milton in scoring with 10 points including a thunderous tip dunk while sophomore point guard Johnny Blaize showed flashes of his talent and potential, mixing in strong drives and pull-ups alike.

A spirited Tabor squad fought back from a first half deficit and gradually grew their own lead in the second half.  Rodney Morton and Bryce Boggs led a balanced offensive effort with 14 points each as Morton connected on a pair of threes and Boggs showed a strong driving game.  Miles Wright added 12 points of his own as he continued to look more and more like his old self after this summer’s injury while Jesse Bunting solidified the team on the interior.

Miki Ljuboja and J.D. Slajchert led the way for Exeter with 11 points each.  Ljuboja, who is already committed to Brown, is a skilled shot-maker with a deceptively quick first step off the dribble while Slajchert stood out with his toughness and developing versatility.

Brimmer & May knocked off Pingree in the rubber match after splitting their previous contests in each of the last two seasons at the Scholar Roundball Classic.  Sammy Mojica aggressively attacked the rim to the tune of 20 points while Andrew Simpson showed his power and bounce alike while finishing with 15 of his own.  David Watkins chipped in with 9 points along with a handful of rebounds and assists.

Johnnie Spears continued to pace Pingree with a gear beyond most others in the backcourt while Kyle Lentini provided a physical post presence with some crafty footwork.  A pair of sophomores, Alonzo Jackson and Justin Assad, also stood out as talented young prospects who could make a name for themselves in the coming years.