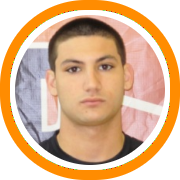 Yesterday up at the Mass Rivals Kickoff Tournament in Northern Mass, we took in an entertaining double-feature; starting with a late-morning matinee in which the Rivals 17s won by a dozen or so over the RI Hawks 17s and culminating with a blow-out victory by the Rivals Freshman over a Middlesex Magic 16u squad.  Here's who impressed.

Dimitri Floras - Not too many guys have improved as much as Floras in the past calendar year, and he was pretty darn good to begin with.  When you combine his toughness and seasoned back-court game with noticeably increased speed and athleticism, things could get interesting this spring recruiting-wise.  D-Flo pumped in 25 points yesterday to lead the Rivals to the win.

Noah Vonleh - Made a mess of the stat-sheet all afternoon, scoring the ball inside and out, rebounding at the top of the square, blocking shots, and driving the ball off the bounce from the point forward spot before kicking out to a shooter on the arc for a high percentage three-pointer.

Mike Auger - Started out the ball game noisily with a trey ball and a few put-backs off mean boards before catching a shoulder dislocation about five minutes into the game.  Stay tuned...

Josh Sharma - Big Josh is going to be a fun prospect to follow over the next few years.  With his combination of height, length, athleticism, skill, and smooth body-movement, as his seasoning develops he becomes a fire-ball competitor, Sharma is going to develop into a tarantula of a prospect.

Jeremy Miller - Keeps getting better and better as he continues to learn how to use his giraffe length out on the floor.  Yesterday, Miller blocked shots, consistently contended aggressively for rebounds, and knocked down a series of trey balls with his feathery stroke off kick out feeds from his mates.

Mike LeBlanc - Long athletic wing player with a textbook shooting stroke and a selfless attitude that oozes coachability.  Lot of room left to improve as he gets stronger and gains confidence.

Matt Cimino - As he continues to grow into his long, rugged frame, Cimino looked smoother running the floor and more explosive making plays in the paint.  He also knocked down a number of treys, shooting a A- percentage off the catch and shoot.

Patrick Benzan - Coming off a standout scholastic season at Roxbury Latin, Benzan played a tight, quick-possesion floor game, taking care of the rock like a French Au Peir while dishing out dimes and showcasing his ability to effectively use the weapons at his disposal.

Pete Weston - With Sam Donahue and Henry Bolton both slowed-up with nagging-injuries, Weston was very impressive leading Jay Elliot's back-court yesterday.  In addition to playing an impressive floor game, he scored the ball extensively by attacking the basket with the bounce and knocking down shots from all over the floor off both the dribble-drive pull-up and the catch and shoot launch.

Harrison Taggart - Cerebral wing player who thrives playing the glue-guy role on the offensive end of the court.  Facilitates for his teammates in a number of ways; spreading the floor with his sweet shooting stroke, making sharp, crisp, accurate passes, and setting blood-oath screens.

Evan Scott - 6'4 G/F - '12 - North Kingstown HS - Active, athletic wing player who defends multiple positions, rebounds well from the perimeter, and has the ability to finish at the rim.  Mixes it up with pleasure in the paint.  Also knocked down some mid-range jump shots and had a nice two hand dunk on the break in the second half.

Skyler White - Big fella rebounds it hard, runs the lanes, and spreads the floor with his long-range-stroke.  Also capable of running the trailer on the break, as he showed yesterday by connecting on a nice two-hand dunk shot on one occasion and knocking down transition threes on others.

Aaron McLean - Since last summer, McLean has gained some inches both vertically and horizontally; and it's a game-changer.  With his combination of height, length, speed, athleticism, and motor, McClean showed yesterday as a prospect with the potential to develop into a thoroughbred rim-runner who plays above the tin.  Active and aggressive all over the floor, A-Mac finished with loud one-hand throwback dunks on several occasions yesterday.

Chris Baldwin - There is no debate that he has star potential, and yesterday, he showcased that fact in a major way, attacking the basket and the offensive glass with ferocity from the point forward position to score the ball at will in the paint.  Made a concerted effort to challenge the old-school, non-breakaway rims at the Parker Middle School in Reading with a series of cranberry jams off the put-back, the dribble drive, and the fast-break catch and finish.  As he learns to play consistently with that same ferocity, CB should go viral.

Sultan Olusekum - Coming off a breakout freshman season running the point for Belmont Hill, Sultan showed yesterday as another back-court player who has improved drastically in the past calendar year.   Having tightened up his skill-package and smoothy made the transition from combo to point guard, Oleskun is really coming on as a floor-general prospect with the ability to efficiently run a high-level squad.

Ben Judson - Long south-paw guard with a black-belt skill-set who attacks off the slash from both the wing and the back-court.  Showed an improved shooting stroke yesterday, knocking down shots from both the mid and long range.