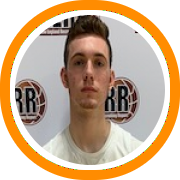 True big men like Griffin Walbridge are typically late to develop. It takes them longer to grow into their body, develop their coordination and balance, and then define their game.

A year ago, Walbridge was finishing up his junior year at Longmeadow High School where his size had differentiated him in Western Mass, but beyond that he was still a virtual unknown. He ended up transferring to Tabor Academy for the 2019-20 academic year and reclassifying upon his arrival.

Since then, things have started to click. It's still way too early to tell exactly what level of college basketball he ends up at, but there's a steady diet of academic D3 coaches who would love to have him and an increasing number of coaches from higher levels eager to see if he can keep ascending at the same rate.

I am a 6’9” big man who just completed his first year (reclassified junior) at Tabor and after quickly acclimating to the speed and physicality of the prep school game asserted myself as a very productive player who improved every day.  I am proud to have finished my first season averaging a double-double and 3 blocks over the final stretch of games, contributing to my overall season stats of 10, 8 and 2.  I am even more proud of embracing a “we over me” mentality, which I first heard at Tabor.  I knew that was the kind of player I wanted to be.   Having that mentality really helped me achieve improving skills and results that make me extremely excited about continuing this momentum into my senior year at Tabor and into the college ranks.  I believe if there is a strong sense of “we over me” on a team, then that team will do great things.

"Griffin has tremendous potential and is truly just beginning to realize his potential.  The 6'9" big has great feet, soft hands and hard-to-teach patience.  He sees the floor well and passes out of the post as well as any big I've coached.   He grew so much this year, finishing the year with 5 straight double-doubles.  He's a great kid from a great family.  He's going to continue to progress and is going to be a very good college player."
- Chris Millette, Head Coach, Tabor Academy

"He's a prospect who is going to require close observation over the course of the next year because of how quickly he seems to be evolving. He's a true big man with legit size who catches, has both hands around the rim, and solid footwork. He frequently goes right into contact, seems active defensively as well as on the glass. His passing instinct at his size might be his most rare attribute though, because he can both see the entire floor with poise in the post but also step to the perimeter and throw back-door passes. Overall, he's a vastly different player now then when I first saw him last June and hasn't shown any reason to believe that rate of improvement is slowing down."
- Adam Finkelstein, NERR & ESPN