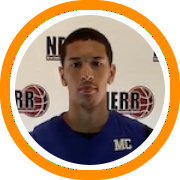 Rios has adjusted well to the prep level since starting at Bradford Christian Academy this fall, becoming an important part of a team that is 18-5 and just cracked the national top 15 rankings for the first time in program history.

“Cristian will be a great addition to Post,” Bradford Christian head coach Vin Pastore said. “He brings physicality and toughness around the rim, but then has the ability to step away and knock down the three-ball on a consistent basis."