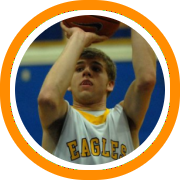 The RIIL has made its way through eleven weeks of the season with one to go until the playoffs begin. Here's a look at players and teams still success moving into the final stretch:

Hendricken – After a slow (1-4) start to the season, Coach Gomes changed Hendricken's style of play and the Hawks defense has proven to be championship worthy as a result.  Hendricken has won 10 straight after knocking off highly acclaimed St.Raphaels 68-52. The Hawks will continue to look for their leading scorer Lee Messier on offense to keep up their winning ways.

St. Raphaels – The reigning state champs are no longer the unbeatable team they looked to be at first.  They’ve now lost four of their last seven games, and shifting into playoff mode, one of the biggest issues is that Charles Correa is the team’s lone threat from behind the arc.  Cesar Meijia will need to step up if they’re to fulfill their championship aspirations.

Ben Engvall – The junior captain continues to make an impact at Barrington High School as he scored his 1,000th point in a win over Pilgrim Tuesday night and was the subject of the most recent 2eZ Mixtape as a result. Engvall then scored 29 on Thursday, 23 of which came in the second half to take out a talented Rogers team (60-53). Teammate Corey Daugherty plays a big role by controlling the ball for Barrington and knocking down open threes.

Kealen Ives – Classical's sophomore guard has stepped up in yet another big game this week to take down Central (69-63). Ives destroyed the defense, dropping 30 points and sharing the wealth with teammate Ishmael Batista who finished with 25. Kealen has also been consistent in finding Terrill Toe to knock down threes.

Ryan Lawton & John Morrison – One of Rhode Island’s best duos, the West Warwick seniors are preparing for a state championship run.  Lawton continues to add himself to the record books after snatching his 1,000th rebound this week and already scoring his 1000th point earlier this season.  Morrison is another 1000 point scorer who contributes to the Wizard’s success (16-1) by leading the team in scoring with over 70 threes on the season.

Latest to One Thousand – Ryan Anderson of Johnston and Even Hole of Portsmouth were the latest RIIL products to hit the 1000 point milestone this week.