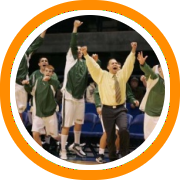 Rhode Island will have an undisputed state champion for the first time this year.  While the RIIL previously crowned championships in three different divisions, they are now on the verage of a 16 team state tournament that will include 8 division I teams, 3 division II teams, and 3 division III teams.

Here are the Seeds:

Cranston West enters the tournament as the number one seed and one of the favorites to win the tournament behind the play of senior point guard Brian Yarce, averaging 17.8 ppg through the season. Yarce is regarded as arguably the best pure point guard in the RIIL, and has had a huge season so far. Off the ball, second leading scorer Andrew Levy is a versatile senior forward who can play multiple positions and score the ball in different ways. West cruised through the Division I tournament, beating Smithfield, Coventry, and Central en route to the Division I chip.

Portsmouth high school is the 8th and final Division I team in the 16 team field. Last year, Portsmouth was crowned Division II state champions behind the play of sophomore phenom Andrew Chrabascz before his transfer to Cushing Academy. Their first year in Division I has been up and down, finishing 10-8 in Division play but 10-11 overall. Portsmouth will turn to guards Henry Bolton and Evan Hole to lead them to run to the Ryan Center.

North Providence high school comes in as the top Division II team in the state, fresh off a win in the final of the Division II tournament over Rogers High School. Posting a 22-3 regular season and Divisional tournament record, North Providence plays a fast paced, aggressive style propelled by explosive guards Austin Van Bemmelen and Michael Ferrante, who can catch fire from behind the ark and score in bunches. Inside, they turn to Jake Didomenico, a sophomore big whos been consistent and solid all year long. If they catch fire in the tournament, North Providence could be a dangerous team poised to make a deep run in the Tourney.

Saint Raphael comes into the tournament as the 5th Division I team and fifth seed overall as a highly talented team with a solid shot at the title, despite underachieving at points throughout the regular season. St. Rays Junior guard Cesar Mejia is among the top scorers in the RIIL and is capable of going off for big numbers at any time. Along with Mejia, point guard Charles Correa has had a solid sophomore campaign. The two form one of the best backcourts in the state and will have to be at their best to carry their team to the Ryan Center. Senior forward Trevor Vasey also gives them a nice third option.

Squaring off against St. Rays is a tough Westerly squad, the fourth Division II team and twelfth seed overall. Westerly features a tough inside out duo in sophomore point guard Austin Cilley and Senior big man Zach Wells. Both have been dominant throughout the season, with Cilley having a breakout sophomore season averaging 16.2 PPG and hitting 47 triples. Inside, Wells has been as solid as ever, leading his team, dominating the boards, and chipping in 16 PPG. Although Saint Rays is a higher seed, Westerly will definitely be a tough out, and could steal an early upset if  Saint Rays is unprepared.

Coventry is the 4 seed in one of the most intriguing matchups of the tournament as they square off with neighboring town and rival West Warwick high school. Coventry is in its first year in division I and has had a very solid campaign behind its big three, senior point guard Nate Stitchell and Juniors Aaron Greenwood and Garrett Douglas. The three combine for 49 PPG, and all are capable of taking over a game offensively. Stitchell is the leader of the group, a true floor general who leads their fast paced attacking style.

As for West Warwick, they play a similar up tempo style, led by junior guard Max Motroni, who just recently netted his thousandth point. Guard John Morrison is a pure shooter, hitting 61 triples on the season, while Ryan Lawton inside is a double double machine. Both teams each feature three very solid players who account for the majority of their scoring. Because of the rivalry, a great crowd is anticipated for this opening round clash. West Warwick has proved all year to be one of the toughest teams in Division II.

The road to Hendricken’s potential 8th straight state championship will have to go through Johnston High School. Although they are often the top seed in postseason play, this year they check in as the number 3 seed. The Hawks have been dominant in Rhode Island for a long time, but this year might be there toughest postseason run yet, as they struggled at times in the regular season. Coach Jamal Gomes team features a balanced scoring attack featuring upperclassmen Tim Lyons, Corey Palumbo, Steven Bevilacqua, Dujuan Ives, Rory Temkin, and sophomore Lee Messier. As the past championship runs have told us, Hendricken has to always be considered one of the favorites to take the title.

Johnston High School has no easy task in front of them in trying to knock off RIIL goliath Hendricken. If they are to pull the upset, it will be behind the play of dominant senior forward Isaac Medeiros. Medeiros has dominated the Division III competition all year long. The 6’5 big scored his thousandth point early this season, and has posted a double double in nearly every game and averaged a steller 21.2 Points Per Game.

Lasalle checks in as the 6 seed overall, as coach Bill Black has led his team to a very solid season in his second year as head coach. The rams are a team with a core of sophomores and juniors, led by class of 2013 sharpshooter Tom Hunt (16 PPG) and 48 three pointers. In the regular season, Lasalle began the season strong with an 8-3 start. If the rams can return to their early season form, they will have a shot at a deep run.

Tiverton is the 11 overall seed and was a very consistent force in Division II this year. Led by senior St. Georges Transfer Gunner Bjornson, who averaged 23.7 PPG and was a big time scorer all year long, Tiverton is a senior laden team who could be prepared to knock off Lasalle in the first round.

North Kingstown High School made it all the way to the state championship game last year before ending up on the wrong side of a blowout at the hands of Bishop Hendricken. Coach Aaron Thomas has the skippers poised and ready to get back to the Ryan Center and give themselves a chance to pull out a better result then in last years title game. NK has a tremendous inside out duo, starting with junior guard Rob Hazard. When under control, Hazard has game breaking ability and can take over the game with the ball in his hands. To complement Hazard, senior power forward Derryck Kilgore is as solid as they come in the RIIL, averaging 16.8 PPG.

Central features arguably the best player in the RIIL this year in senior Robert Lewis 22.3 PPG. They’ve been in the mix all year and lost in the Division I championship game to Cranston West. Athletically, they are one of the top teams in the state and if Lewis is in top form Central has as good a chance to win the entire thing as anyone.

Juanita Sanchez is a tough, athletic team who was dominant all year in Division III play. Sophomore Evan Hopson is a versatile player, and proved to be the cavaliers most consistent option throughout the course of the season averaging 16.7 PPG. Senior Ramon Quinonez was also solid, averaging 14.4 PPG.