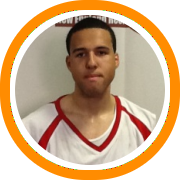 St. Johnsbury had scored two wins over Rice earlier this season, and seemed well on their way to a third when they opened the game on a 10-3 run, but the champions responded with a big second quarter before the game went back and forth for virtually all of the second half.

Rice was led by their senior tandem of Marcus Willingham and Casey Tipson.  Willingham had 17 points, 14 rebounds, and 4 assists while Tipson added 14 points of his own.  James Wells had 10 points and 3 boards, while being huge down the stretch, but no basket was bigger than the one scored by Tom Fitzgerald to force overtime with just 11 seconds remaining in regulation.

St. Johnsbury’s junior forward Vlad Cobzaru, who was nursing a sprained ankle throughout the game, fouled out with just over three minutes left in regulation but still managed to secure a double-double with 10 points and 10 rebounds.  Jake Grinbergs added 11 points and 9 rebounds.

While Rice has taken the state’s top crown, there are still three state champions left to be decided and that will happen on Saturday at Barre Auditorium beginning with the division 4 final as Rochester meets West Rutland at noon, followed by the division II game at 3:45pm as Vergennes Union takes their 20-0 record into the finals against Burr & Burton Academy.  The nightcap will be Williamstown against Thetford Academy in the division III final at 7:30p.m.