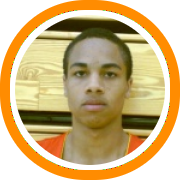 Teams at Charlie Weber’s Penn State tournament learned a valuable lesson this weekend…don’t overlook a team just because they are from a small state.  The Rhode Island Hawks were the dominant program of the tournament as their 17 and under team won the championship in their age bracket while the 16 and under team advanced to the finals before falling to Team New Jersey Elite.

Although 17u Head Coach and Program Director Jason Elliott gave credit to his entire roster for a well played weekend he did point out that Worcester Academy’s Bill Clark had a special few days.

“If there was an MVP of the tournament it would have been Clark,” said Elliott.  “He was hitting shots from everywhere and defending”.

The 6’6 small forward saved his best for last as he scored 31 points in a 69-54 victory over the Donyell Marshall All-Stars in the championship game, knocking down 7 shots from behind the three-point line.

In the semi-finals it was 6’2 combo guard Anthony Fortes from Proctor Academy who stepped up for the Hawks.  Fortes knocked down threes, slashed to the basket, and was able to get himself to the free throw line quite a bit by hanging in the air until defenders were forced to foul him when finishing around the basket.

Holding down the frontline was 6’8 senior forward Andrew Yanulis from Boston College High School.  Yanulis showed maturity beyond his years as he was extremely patient with his back to the basket and was consequently able to score quite a bit.

Also stepping up for the Hawks was 5’10 point guard Mason Kenney from North Kingston High School.  Kenney might not be a name that is as widely known as some of his teammates but he did an outstanding job of running the team and getting the ball where it needed to go throughout the weekend.

The Hawks got a scare in their opening round game as the New York Cardinals took them down to the wire.  With less then 30 seconds remaining in the game and the Hawks ahead 70-67 the Cardinals came down the floor and tied the game on a contested and off-balance three-pointer.  Now with the game tied at 70 the stage was set for a story book ending and Bishop Hendricken’s 6’5 senior swingman David Rufful stepped up to play the part as he knocked down a 15 footer at the buzzer to win the game.

The 16 and under team had victories over Squash All Beef of Maryland, the Pittsburgh Shockers, and Crusader Nation of Maryland, before running into another local program in New England Select in the quarterfinals.  Despite a tough game from Nobles 6’7 sophomore forward Tucker Halpern, the Hawks were able to build upon their two point halftime lead to win the game 78-71.  The Hawks were then able to hold off JJ Hoops from New Jersey in the semi-finals.

But in the finals the Hawks simply ran out of gas as they had three players on their roster who were playing for both the 16 and 17 year old teams in Smithfield’s 6’4 junior shooting guard Mike Marra, Worcester Academy’s 6’9 sophomore center Ben Crenca, and Brewster Academy’s 6’0 sophomore point guard Devan Bailey.

“Marra played really well,” said Elliott.  “He had five straight three’s in the game versus positive image and a couple of crazy dunks in the 16 games.”

Bailey also impressed with his lock down full court defense, floor vision, and ability to distribute the ball creating for his teammates.  6’2 sophomore Sam Martin from Worcester Academy and 6’2 freshman guard Joe Sharkey from Brimmer and May also played well.

And while the Hawks were dominating the action at Penn State another Rhode Island team was turning heads at Charlie Weber’s other tournament, the DC Easter Hoopfest, as the Breakers defeated Team Jersey Elite Orange to win the American Division of the 17 and under bracket.

It turns out the small state produced a lot of big basketball this weekend.