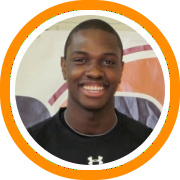 St. Andrew’s big man Cedric Kuakumensah is the top ranked player in Rhode Island’s rising senior class.  The six-foot-seven Massachusetts native has the size and strength that are requisites for the division I level and has also shown some potential as an inside out type post player.

North Kingston’s Rob Hazard is the RIIL’s top prospect and second best overall in the state.  A scoring lead guard who can put points on the board in a hurry, Hazard shoots the ball well with range but can also create his own offense off the dribble.

Kuakumensah’s running mate along the Saints’ frontline checks in at the third spot as Kalusha Ndoumbe Ngollo has a high upside thanks to his powerful six-foot-eight physique and the skills to extend his game out to the three-point line.

West Warwick’s Max Motroni put up big numbers during his junior year, proving himself to be one of the RIIL’s most dangerous players, and currently checks in at the fourth spot as a result.

Rounding out the top five is St. Raphael’s athletic wing forward Cesar Mejia, whose physical attributes set him apart from the vast majority of his peers in Rhode Island.

The rest of the top ten consists of four public school products and one prep school player.  North Providence’s backcourt duo of point guard Austin Van Bemmelen and shooting guard Mike Ferrante check in together at six and seven respectively.

St. Andrew’s versatile six-foot-three swingman Tom Garrick, who has the versatility to play and defend multiples positions, comes in next at eight.