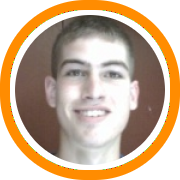 With 240 teams in action, including over 80 alone in the u17 division, and games spread across gyms in the greater Providence area, the biggest challenge was trying to see everybody this weekend.  While that turned out to be impossible we did see quite a few impressive performances while going back and forth from the two Rhode Island College sites on Saturday.

New England Playaz u16
The Playaz 16 and under squad was the most dominant team we saw on Saturday, in any age bracket.  Led by 6’0 freshman point guard Nadir Tharpe (pictured above) the Playaz were extremely impressive as they completely overwhelmed their competition with their full court pressure and transition game.  While Tharpe ran the show it was a balanced effort on both sides of the floor.  6’8 sophomore power forward Jordan Williams showed an improved physique and was dominant on the interior scoring, rebounding, and even hitting the open man when the double team came.  6’7 freshman Nate Lubick continues to impress with his ability to score inside and out, handle the ball in the open floor, and rebound in traffic.  6’2 sophomore guard Dominique Langston was explosive finishing off the break while 6’5 sophomore Givon Crump knocked down a couple threes from the perimeter.  Overall it was an extremely impressive and entertaining performance by a Playaz squad that will be fun to watch over the next few years.

Marc Zaharchuk – Maine Hoops
The 6’10 junior center from Richmond High School was intriguing on Saturday.  Zaharchuk is virtually unknown outside of Maine, and certainly needs to continue to develop, but he shows some flashes of ability that caused the college coaches in attendance to take notice.  The big man ran the floor pretty well, showed a baby hook around the rim when coming off a screen, and even hit a three pointer on one possession.

Lambros Papalambros – Middlesex Magic
Papalambros ran the show for his Magic team that not only won their pool but defeated a very good Connecticut Gold team in the first round of bracket play.  He was effective off the dribble both by getting all the way to the rim and also by pulling up in the mid-range area.  Papalambros is currently a senior at Archbishop Williams High School in Massachusetts and planning on attending Suffield Academy for a post-graduate season next year.

Kris Noonan and Sam LeClerc – MBR
Noonan and LeClerc formed a potent one-two punch in MBR’s game against the Magic.  Ultimately the two headed monster wasn’t enough to get it done for the Maine based squad as the Magic’s depth got the better of them.  Nevertheless Noonan, a 6’5 post player from Boothbay Regional High School, impressed with his footwork and basketball I.Q. in the post while LeClerc made some beautiful passes and almost willed his team to the victory down the stretch.

Josh Last – NH Playerz
After apparently not landing a scholarship this year, Last is back on the AAU circuit with plans of attending prep school next year at either Tilton or Northfield Mount Hermon.  Although he played off the ball for large stretches of the game we watched, his court vision and ability to distribute the ball was impressive as was his ability to create his own shot in the open floor.

Kirk Crecco – NH Playerz
The 6’2 swingman from Gilford High School was extremely impressive down the stretch for the Playerz in their win over the Connecticut Flame on Saturday afternoon.  Crecco showed a pure shooting stroke from behind the three-point line as well as some craft when finishing inside against bigger and more athletic defenders.

Derrick Thomas – NE Playaz
The Playaz oldest team was short-handed Saturday and actually started their game against the Jersey Jayhawks with only five players, but that provided Derreck Thomas with an opportunity to step up.  After playing behind the likes of Gary Correia (UMass), Matt Glass (UMass), and RJ Rutledge (Monmouth) at Northfield Mount Hermon this year the rising junior appears poised for a break out season for NMH’s new head coach John Carroll.

Bill Clark – Rhode Island Hawks
Fresh after his dominating performance at Charlie Weber’s Penn State tournament last weekend Clark picked up right where he left off knocking down three pointers and throwing down highlight reel dunks.  The only problem was that because this was an ACT weekend division I coaches were not allowed to be in the building.

Sam Martin and Mike Marra – Rhode Island Hawks u16
There likely wasn’t a more potent outside shooting tandem then Martin and Marra.  It was essentially a game of pick your poison as either player was capable of rattling off multiple three-pointers at any minute.  In the Hawks opening game of the tournament Martin went for a career high 40 points including 9 different three-pointers.  A day later the duo combined for 7 second half threes to bring the Hawks back from an 8 point halftime deficit in their first bracket play game.  The Hawks ended up reversing that margin and winning by 8 as the outcome was punctuated by a soaring Marra dunk that led one onlooker to appropriately react, “I didn’t know he had that”.

Chris Evans, Diego Ramirez, and Luke Mattarazzo – Connecticut Basketball Club u16
The trio was very impressive as Connecticut Basketball Club’s 16 and under team plowed through the competition on Saturday with their margin of victory never coming under 18 points.  Evans didn’t show any effects of a broken hand that cut his high school season short as he showcased a tight handle, explosive athleticism, and a throwback mid-range game.  Ramirez was equally explosive finishing high above the rim with both power and body control, dominating the glass, and even blocking some shots.  Meanwhile Mattarazzo created easy shots for his teammates off the dribble while also knocking down multiple three-pointers during the final 5 minutes of play.

Bracket play is scheduled to continue throughout the day on Sunday with many local teams still in contention.  The action will continue next weekend as the “Live” period picks back up with many local teams planning to attend another Hoop Group event the Pittsburgh Jam Fest, the Crab City Classic in Marlyand, or the Charlie Weber Spring Fling in Washington D.C.