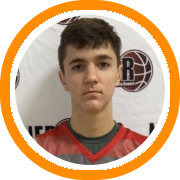 The Prodigy Basketball Club took a significant step forward in the New England grassroots landscape last year and this year they’re prepared to sustain that level of success.

Maurice Taylor has once again assembled a deep and talented roster that is anxious to prove themselves against the very best in the region.

This year’s team can be characterized by a pair of themes….the outright talent of their frontcourt and the depth of their backcourt.

That frontcourt comes down to a core trio that can complement each other at all times.

Ryan Rudnick is an unsigned senior from Governors Academy. He’s an elite level shooter and prototypical stretch-four who has expanded his game on the defensive end of the floor to be able to protect the rim and rebound in traffic. With the high basketball IQ to match, his game will only continue to go to new levels as he keeps growing into his body.

Then there’s the Fleming tandem. Hunter Fleming is built like a more traditional post with good size at 6-foot-8 and a strong body to match. He’s tough and physical, able to use his body to displace players and secure rebounds, but also a versatile scoring threat and another highly intelligent player. Cam Fleming is still growing into his body, like Rudnick, but he is a highly skilled and versatile forward who can stretch the floor, score inside-and-out, while also making a lot of extra hustle plays.

On the perimeter, there is depth and versatility alike, giving Taylor the freedom to construct his line-ups depending on the needs of the particular match-up.

Jerry Dottin Jr. is an unsigned senior with good size, strength, and athleticism to physically overpower most opposing guards. He’s a versatile scoring threat who also possesses the understanding of the game to create for his teammates as well. Marcos Montiel is a similar power player on the perimeter with a supercharged motor. He can get to spots and create plays when under pressure and is also a talented on-the-ball defender.

Lucas Mouthaan is a skilled wing that thrives in transition and can score in the mid-range area when the game slows down with an efficient overall approach. Most of all though, he’s capable of standing out on the defensive end of the floor, where he can guard multiple positions.

Markus Nordin is a long and athletic guard who plays well above the rim. He rebounds, defends multiple positions, and also has a very soft shooting touch. Kanye Wvezwa has similar length and athleticism in the backcourt with the jump-shot to match. He plays within himself, doesn’t force anything, and lets his game do all the talking for him.

Jayden Costa-Haywood is another wing who provides versatile individual offense with the physical tools to thrive athletically. He can defend, rebound, and has a very clear upside.

Demian Vial is a no-nonsense guard that produces. He’s skilled, poised, an impeccable defender, and able to create for himself and his teammates. Trystan Carter is a gifted ball-handler with excellent court vision and unselfish almost to a fault.

Ian Murray is one of the top talents in the state of Maine who is traveling south to play with Prodigy. He has terrific size for the position, a good foundation of skill to his game, and, most of all, the savvy and understanding of the game to thrive with the ball in his hands. He’s also a good positional defender and perimeter rebounder.

Gavin Deluties is the youngster on the team, but the freshman may also be the best long-term prospect. He’s long and still undeveloped physically but already has a beautiful shooting stroke and solid motor that will undoubtedly continue to blossom as he grows into his body.

Stay tuned to NERR this week for the release of Prodigy's full Be Seen movie trailer.